Share
Facebook Twitter LinkedIn StumbleUpon Tumblr Pinterest Reddit WhatsApp Telegram Share via Email Print
Share
His campaign has issued a statement that says Ms Palin was “proud” to endorse the billionaire.
Ms Palin was the vice-presidential nominee on Republican John McCain’s unsuccessful run in 2008.
She drew huge crowds and massive media attention, and is expected to join Mr Trump on stage at rally in Iowa on Tuesday night.
Sarah Palin said in the Trump campaign statement: “I am proud to endorse Donald J Trump for President of the United States of America.”
The New York businessman, who leads the Republican race, said her backing was “coveted” and “influential”.
He said she was a “trusted conservative” with a “proven record of being fiscally modest, staunchly pro-life and [she] believes in small government that allows businesses to grow and freedom to prosper”.
Ahead of the announcement, Ms Palin tweeted a link to an article by her daughter Bristol attacking Mr Trump’s main rival for the key Iowa caucus, Ted Cruz.
Iowa is the first chance for voters to have their say in the nomination race.
While the former Alaska governor’s reputation has been diminished since the heady days of 2008 – thanks to her absence from public office and involvement in series ofquestionable reality television shows – she is still well liked by conservative Republicans and nearly universally known.
Her backing could help insulate Mr Trump against charges that he’s not a true believer in the cause due to his support for liberal political issues and candidates in the past.
At the very least, she could add even more crowd-drawing power to a Trump campaign that already fills entire sports arenas. 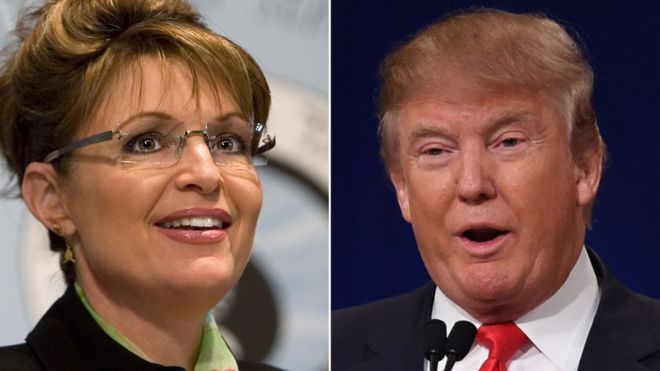