Preliminary findings say it was hit by “high-energy objects from outside the aircraft”, fuelling speculation that a surface-to-air missile was responsible.
The West and Ukraine say Russian-backed rebels brought down the Boeing 777, while Russia blames Ukraine. But the report will not say who was to blame.
Russia is to issue its own report.
The plane – flying from Amsterdam to Kuala Lumpur – crashed in rebel-held eastern Ukraine on 17 July 2014 at the height of the conflict between government troops and the pro-Russian separatists.
The victims included 193 Dutch nationals and 10 Britons.
Prosecutors have suggested that the aircraft was most likely brought down by a Russian-made Buk surface-to-air missile – which experts say both Russian and Ukrainian armies possess.
The government in Ukraine and several Western officials have said the missile was brought from Russia and launched from the rebel-held part of Ukraine.
Russia denies the accusations, saying the plane was shot down by either a surface-to-air missile fired by Ukrainian forces or a Ukrainian fighter jet.
The Ukrainian government in Kiev rejects these claims as groundless.
In July, Russia vetoed a draft resolution at the UN Security Council to set up an international tribunal into the MH17 air disaster.
President Vladimir Putin said at the time the establishment of such a tribunal would be “premature” and “counter-productive”.
Before the Dutch report is released on Tuesday, Russia’s state arms producer Almaz-Antey – which makes Buk missiles – is expected to announce the results of its own investigation.
Senior Russian government officials have said the Dutch investigators have not been co-operating with Russian experts.
“A series of facts [about the shooting down] that were presented by Russia seem have not been taken into consideration – for reasons that we do not understand,” Dmitry Peskov, a spokesman for President Putin, said on Monday. 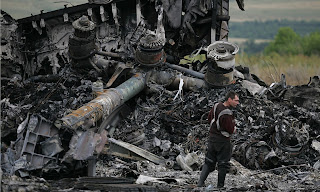 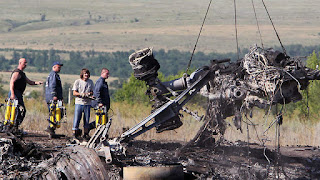