Share
Facebook Twitter LinkedIn StumbleUpon Tumblr Pinterest Reddit WhatsApp Telegram Share via Email Print
Share
No group has said it carried out the attack, but the government believes that two male suicide bombers caused the explosions, hitting a peace rally.
The official death toll is 97 but rally organisers have put the figure at 128.
Funerals for more of the victims were held on Monday, with some mourners expressing anger at the government.
Saturday’s twin explosions ripped through a crowd of activists outside the main railway station in the Turkish capital.
They were due to take part in a rally calling for an end to the violence between Turkish government forces and the militant Kurdistan Workers’ Party (PKK).
There is anger in Turkey that authorities were unable to prevent such a major attack – and some scepticism from opposition groups about the government’s claims.
The situation in Turkey was tense even before the Ankara bombings. The ceasefire with the PKK had broken down and there had been clashes between the militants and security forces, killing at least 150 since July.
Some local media have implicated the brother of a man who carried out an IS bombing in the southern border town of Suruc in July, which killed more than 30 people.
Turkey announced after the Suruc bombing that it would allow its southern Incerlik airbase to be used by the US-led coalition targeting IS in Syria. Turkey, a Nato member, shares a long land border with its unstable southern neighbour.
The Ankara bombings are the deadliest in Turkey’s history.
“These attacks will not turn Turkey into a Syria,” Prime Minister Davutoglu said on Monday.
Speaking on Turkish television, Mr Davutoglu said the bombings were an attempt to influence elections due on 1 November, after a vote in June left no party able to form a government.
Many of the victims were activists of the pro-Kurdish HDP party, which says it is now considering cancelling all election rallies. It believes its delegation at the march was specifically targeted.
The HDP gained parliamentary seats for the first time in June’s vote, depriving President Recep Tayyip Erdogan’s AK Party of its majority.
The AK Party condemned the attack and announced it was suspending all of its rallies until Friday. 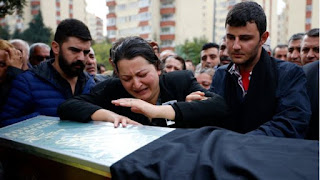 Ukraine disaster: Dutch to report cause on MH17