Share
Facebook Twitter LinkedIn StumbleUpon Tumblr Pinterest Reddit WhatsApp Telegram Share via Email Print
Share
Many are carrying photos of their loved ones in Mexico City, demanding justice.
The parents want the government to hand over the investigation to a special unit under international supervision.
They dispute the government’s account that the students were handed over by police in the city of Iguala to a criminal gang, which killed them.
A group of independent experts has suggested the students were killed because they unknowingly took control of a bus carrying illegal drugs, and the government did nothing to protect them.
Meanwhile, President Enrique Pena Nieto has announced the creation of a special team to look into the case.
The marchers are moving along Mexico City’s Paseo de la Reforma towards the city’s historic Zocalo Square.
“We came with a thirst for justice,” student Sofia Rojas told the AFP news agency.
“There can be no impunity. Behind the 43 are thousands of disappeared.”
The families are also demanding that the government look into the possible role of the army in the disappearance of the students.
The students disappeared on 26 September 2014, in Iguala in the southern Guerrero state.
They had gone there to gather for a commemoration in Mexico City.
The federal government has said local police from Iguala and the nearby town of Cocula had detained the students and turned them over to the local drug gang, which then allegedly killed them and burnt the remains.
But a team of international experts sent by the Inter-American Commission on Human Rights spent six months reviewing the government’s investigation and found a number of flaws.
It concluded the bodies of 43 students could not have been burned at the rubbish dump in Cocula as the government maintained.
The government says forsenic experts have identified two of the students from the burnt remains recovered from the rubbish dump. 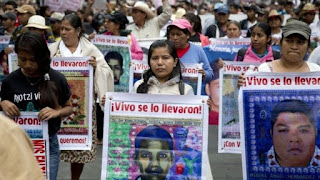 Russia may be seeking proxy in case Syria's Assad falls:U.S