Share
Facebook Twitter LinkedIn StumbleUpon Tumblr Pinterest Reddit WhatsApp Telegram Share via Email Print
Share
Brazil President Dilma Rousseff on Saturday cited the nation’s foreign currency reserves as a backstop to excessive volatility and weakness in the Brazilian real.
“Brazil today has sufficient enough reserves to not have any problem, any disruption due to the dollar,” Rousseff said in an interview broadcast on Brazilian cable news network GloboNews.
With the economy in recession, inflation above 9 percent, a sharp deterioration in government finances, and one ratings agency lowering Brazil’s debt to “junk” status, investors have been heavily betting against the real in the futures market.
The currency (BRBY) (BRL) has weakened 33 percent against the dollar this year.
Rousseff, currently in New York for the United Nations General Assembly, said the government was “extremely concerned” about the weakening currency due to the impact on local companies with dollar-denominated debt.
“The government will have a very clear and firm position, like the central bank had at the end of last week,” she added.
On Thursday central bank chief Alexandre Tombini said that reserves were an “insurance policy that may and should be used.”
The real rebounded sharply from an all-time low following his comments. 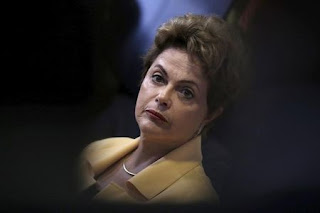