Share
Facebook Twitter LinkedIn StumbleUpon Tumblr Pinterest Reddit WhatsApp Telegram Share via Email Print
Share
Mr Putin urged other countries to join Russia in sending “military-technical assistance”.
He said the influx refugees to Europe would have been “even bigger” without Russian support for Syria’s government.
The US and its Western allies oppose President Assad, and say that backing him risks prolonging the conflict.
But Moscow has been a key ally of Mr Assad during the bloody civil war, which began in 2011.
It says military equipment is being sent to Syria to help the government combat the so-called Islamic State.

President Putin said on Tuesday: “We support the government of Syria… in countering the terrorist aggression.
“We provide and will continue to provide it with the necessary military technical assistance. And we urge other countries to join us.”
Russia’s backing for Mr Assad should be seen not as a vote of confidence in Syria’s embattled president but as an investment in a country where Russia believes it can play out its foreign-policy role.
Indeed Mr Putin’s military deployments signal that he will not let the Assad regime fall. This does not mean Mr Assad will be there forever.
Russian diplomacy is working in tandem with its military policy, exploring all avenues for reaching some sort of interim deal in which Mr Assad might stay on, at least for the time being.
But Russia’s horizons in Syria probably extend well beyond Mr Assad’s active presence – a reflection of Russia’s concerns about militant Islam and wider trends in the region, and also its belief that Western remedies in the Middle East have been an unmitigated disaster.
Speaking at defence summit in Tajikistan, Mr Putin also said the situation in Syria would have been “worse than in Libya” had Russia not been supporting its leadership.
European countries have been struggling to cope with thousands of people arriving at their borders after fleeing the conflict.

President Putin’s comments come after the US expressed concern at Russia’s recent movements near Syria’s coastal city of Latakia.
Pentagon spokesman Jeff Davis said on Monday that a steady flow of people and equipment suggested that Moscow was planning to establish a “forward air operating base” at an airport there.
Last week, officials in Washington quoted by Reuters said Moscow had sent more aircraft and two tank landing ships to Russia’s naval base in the Syrian coastal city of Tartus.
They also said a small number of naval infantry forces had been deployed.
Correspondents say US officials fear that the stepped-up Russian support will strengthen the Syrian government at a time when it has been losing on the battlefield and will complicate efforts to find a political solution.
Russia has denied building up their presence in Syria, although Foreign Minister Sergei Lavrov said last week that Russia would send more help to Syria if requested.
The war between President Assad’s regime and various rebel groups has so far killed at least 240,000 people and displaced millions.
Syrian and Russian state media said on Saturday that two Russian cargo planes with 80 tonnes of humanitarian aid had landed at Latakia – a stronghold of President Assad.
Russia’s defence ministry said the plane was carrying materials for setting up a tent camp for refugees. 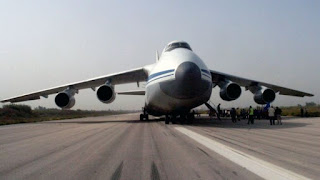