Share
Facebook Twitter LinkedIn StumbleUpon Tumblr Pinterest Reddit WhatsApp Telegram Share via Email Print
Share
The grouping, the biggest in one place since the war, took off from Goodwood Aerodrome in West Sussex, then flew to airfields linked to the battle.
Prince Harry was due to take part, but gave up his seat for a veteran when one of the Spitfires was grounded.
The battle between German Luftwaffe and the RAF was a key moment in UK history.
A service was also held earlier at London’s St Paul’s Cathedral, attended by Prime Minister David Cameron and Labour’s new leader Jeremy Corbyn.
A range of events have already been staged over the past few months to mark the fighting, which raged between July and October 1940.
Tuesday’s flypast and service were held on Battle of Britain Day – the name given to the day, on 15 September 1940, when the Luftwaffe launched its largest and most concentrated attack against London in the hope of drawing out the RAF.
Spitfires, Hurricanes and Blenheims, from across the UK, US and Europe came together at Goodwood Aerodrome. Present-day owners, operators, pilots and engineers were there alongside veterans.
The planes flew past Goodwood in formation before dispersing to historical airfields in Northolt in Middlesex, North Weald in Essex, Duxford in Cambridgeshire, Bentwaters in Suffolk, Colerne in Wiltshire and Biggin Hill in Kent.
Battle of Britain pilot Wing Commander Tom Neil, now 95, led the formation from the rear seat of a two-seat Spitfire.
He was joined by wounded service personnel who have been training to fly as part of the Spitfire Scholarship set up by the Boultbee Flight Academy in partnership with the Royal Foundation’s Endeavour Fund, which Prince Harry launched at Goodwood in 2014.
The historic aircraft were due to take off at 12:00 BST but this was delayed until 14:00 BST because of bad weather.
The BBC’s Robert Hall, at the aerodrome, said one of four two-seater Spitfires due to take part became unserviceable – prompting Prince Harry to pull out to allow others to fly instead.
Battle of Britain veteran Nigel Rose, 97, said pilots at that time only realised the significance of what they were engaged in some time later.
“Gradually more and more examples came up from history to show that this was an important thing to have done, to get the German high command to pull back from invasion,” he said. 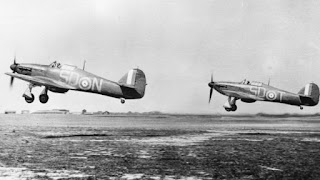