Share
Facebook Twitter LinkedIn StumbleUpon Tumblr Pinterest Reddit WhatsApp Telegram Share via Email Print
Share
French Economy Minister Emmanuel Macron stepped up the pressure on former Alcatel-Lucent CEO Michel Combes, describing his departure from the company before the finalization of a takeover by Nokia as “shocking” and “bad corporate behavior”.
Combes left telecoms equipment maker Alcatel this week to become chief operating officer of telecoms networks operator Altice and chairman of its French subsidiary Numericable-SFR.
He came under fire after French weekly Le Journal du Dimanche said that he could receive the equivalent of around $15 million in Alcatel stock by 2018. France’s AMF financial regulator said on Tuesday it was investigating whether the package respected governance rules.
“It’s not normal that a big company boss is the first to jump ship. Mr Combes led a merger of Alcatel-Lucent and Nokia that we supported,” Macron told reporters on Wednesday after the weekly cabinet meeting at the presidential palace.
“So it is neither comprehensible nor acceptable that Mr Combes has decided today to leave the company when the transaction hasn’t even been completed, both morally and in terms of the proper functioning of the company,” he said.
“This case is shocking and, in particular, it’s truly a case of bad corporate behavior. When you run a company like this, you see the transaction through to the end,” Macron said.
Macron said he was waiting for the response of the AMF and a corporate governance committee – a body set up by companies themselves. He said he expected to have the committee’s response to the circumstances of Combes’ departure by the end of next week. 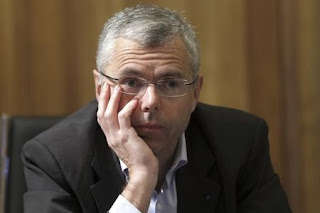