Share
Facebook Twitter LinkedIn StumbleUpon Tumblr Pinterest Reddit WhatsApp Telegram Share via Email Print
Share
Action thriller franchise “The Transporter” is back with a fourth installment and a new star, with British actor Ed Skrein stepping into the black suit of lead character, former special ops mercenary Frank Martin.
Skrein, who appeared in the television series “Game of Thrones”, takes over from Jason Statham in the series, which began in 2002 about a driver who is hired to transport packages.
“It always felt like a pair of shoes that would be comfortable and I could fit into. It didn’t seem too much of a stretch,” Skrein said in an interview.
In “The Transporter Refueled”, Martin is hired by four revenge-seeking women who want to take down a Russian gangster.
In order to get into character, Skrein said he studied the previous “Transporter” films.
“It was very important to watch them … and understand the texture of them and what’s behind them and what’s driving them and what fans expect from them most importantly,” he said.
“And then as soon as I’d seen them it was important to just put them away, try and move on and reflect on each scene as I would with every job.”
French filmmaker Luc Besson has produced and been a co-writer of the films which helped turned “Lock, Stock and Two Smoking Barrels” actor Statham into an action star.
Skrein, who will be seen alongside Hollywood actor Ryan Reynolds in “Deadpool” next year, says he was not worried about comparisons to Statham.
“I really never think about what people think of me or how they would compare me to other people,” he said. “Let’s let the people decide.”
“The Transporter Refueled” hits cinemas this week. 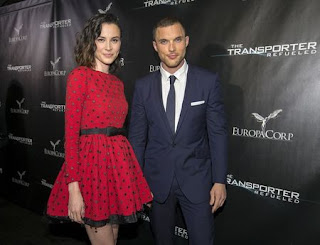