Share
Facebook Twitter Google+ LinkedIn StumbleUpon Tumblr Pinterest Reddit WhatsApp Telegram Share via Email Print
Share
Former Akwa Ibom State Governor Godswill Akpabio yesterday spent hours at the National Hospital in Abuja after a car accident . He was discharged at about 5.10pm, accompanied out of the hospital by Governor Udom Emmanuel and Senator Theodore Orji.They left in the governor’s official car.Akpabio, who is also Senate Minority Leader, was said to be on his way to the Nnamdi Azikiwe International Airport, to catch a flight when the accident occurred.He was rushed to the National Hospital in the city, where doctors described his condition as stable.Akpabio’s car ran into a convoy of a U.S. diplomat.A Federal Road Safety Commission (FRSC) personnel, who spoke on condition of anonymity, said Akpabio may have suffered some injuries in the chest region “due to the way he held his chest after the incident”.The FRSC operatives also said “from the look of things other occupants of the vehicles in the convoy and Akpabio’s driver did not seem to have sustained any injury”.The officer said he was at the scene of the accident around 7.30 am near Bolingo Hotels on the Abuja Airport Road in the Central Business District of the Federal Capital territory (FCT).It was learnt that Akpabio was on his way overseas to visit his family when the accident happened.One of the early callers at the National Hospital was the Senate Deputy Minority Whip, Senator Biodun Olujimi.Mrs. Olujimi said she was told by an official at the hospital that the Akwa Ibom North West lawmaker was in a stable condition.Akwa Ibom State Governor  Udom Emmanuel, who was at the hospital, declined comments.The hospital’s Chief Information Officer Hajia Rabiah Labaran, said Akpabio was brought to the hospital by some FRSC officers.Labaran said: “He (Akpabio) was brought in this morning after he had a car crash as I learnt. He was brought in from the Bolingo Hotels junction where a vehicle crashed into his own vehicle from behind.“Luckily enough when they brought him after the preliminary check –up, it was found that he did not have any serious injury.”He was talking when he was brought in and the medical team that attended to him gave him necessary attention at the trauma unit.“I learnt that as at this afternoon, (12:30pm), he had been taken to the private wing of the hospital for proper care but there was no serious injury.“It is something he can get over in a few days. He is recuperating. He was with his driver but the driver did not sustain any injury.”Last year, Akpabio’s convoy was arrested in Abuja by security operatives for driving against traffic. At the time, Akpabio was governor. The convoy was en route to the Three Arms Zone, the area of Abuja where the administrative offices of the executive, legislative and judicial arms of the federal government are located. The drivers encountered a mild traffic jam close to the Nigeria Police Headquarters and chose the one way.Reports show that at the time of the incident, the then President, Dr. Goodluck Jonathan, was leaving Aso Rock Villa for the National Executive Council meeting of the Peoples Democratic Party (PDP) at the Wadata House national secretariat of the party. Security operatives blocked the road as the presidential convoy moved towards Shehu Shagari Way. Other road users halted movement to make way for the presidential convoy, Akpabio’s convoy was unwilling to queue. They made a detour and speed against traffic at a high, blaring siren and swerving from side-to-side.Heavily armed soldiers and police officers arrested the convoy. The convoy was released with a warning, after the intervention of security operatives attached to the then governor. 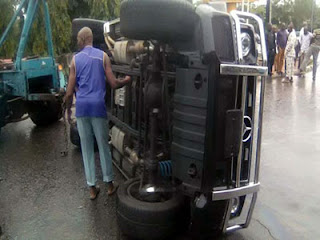