Share
Facebook Twitter LinkedIn StumbleUpon Tumblr Pinterest Reddit WhatsApp Telegram Share via Email Print
Share
Swathed in crimson robes, 77-year-old Ashin Tilawkar Biwonsa shuffles through a crowded conference room with the help of an aide, his supporters standing in respect as he takes a seat at the head of a table under a portrait of his own image.
It is from here, at an unremarkable roadside monastery just outside the city of Yangon, that the abbot is propelling the radical Buddhist group he co-founded into the mainstream of Myanmar’s politics.
Four bills drafted by his Committee for the Protection of Race and Religion, better known as Ma Ba Tha, have been passed by parliament and signed into law. Critics say the new laws effectively legalize discrimination against women and the country’s minority Muslims.
Along with political clout, Ma Ba Tha is also ratcheting up its public image ahead of elections in November that will be the first free vote in Myanmar in the last 25 years. The radical Buddhist group has regular programming on one of the country’s most popular satellite TV channels and has launched a magazine.
“There should be lawmakers in parliament who are reliable for the country,” Ashin Tilawkar Biwonsa said in an interview. “There might be some people, especially Muslims, who are working on weakening Buddhism, so we need strong people for our religion.”
Ma Ba Tha has shown no signs of contesting elections itself but says it will “remind” the public of candidates who opposed its four laws. These include Nobel peace laureate Aung San Suu Kyi and her opposition National League for Democracy (NLD), which is going head to head with conservatives and military figures in the polls.
Established two years ago, Ma Ba Tha sprang from the “969” movement, a loose collection of monks linked to a wave of violence against the country’s Muslim minority in 2012 and 2013.
Senior Ma Ba Tha officials said the 969 movement had raised awareness about threats to Buddhism from a burgeoning Muslim population, but was disorganized and lacked leadership.
“It was (concerned with) only the symbols of Buddhism,” said Ashin Tilawkar Biwonsa.
Now, a growing number of professionals are offering their expertise on everything from media relations to legislation, helping to shape Ma Ba Tha into a slick organization with popular support and real political clout.
One such expert is Aye Paing, who spent two decades toiling as a lawyer in Myanmar’s musty courtrooms before finding a dramatic new use for his legal skills.
Aye Paing and a team of Ma Ba Tha-linked lawyers drafted the protection of race and religion bills, the last of which was signed by President Thein Sein on Monday.
Lawyers, economists, IT experts and other professionals had made Ma Ba Tha “very efficient, systematic and legal” said Aye Paing, 52, who wears a black “taik pone”, a short collarless jacket worn over a shirt that is common among Myanmar’s legal professionals.
“We discuss, give advice and share our visions,” he said.
INTERNATIONAL VISITORS
In another sign of its growing influence, foreign diplomats regularly visit the group’s monastery headquarters.
One was U.S. ambassador Derek Mitchell, who went there twice in May to discuss “the need for increased interfaith dialogue” and “the importance of keeping religion out of politics”, according to a statement from the U.S. embassy in Yangon.
Myanmar’s revered and influential monks led many pro-democracy protests during nearly half a century of military rule in the Buddhist-majority nation. But after a quasi-civilian, reformist government took power in 2011, some outspoken monks claimed Islam was eclipsing Buddhism and weakening the country.
Now, Ashin Tilawkar Biwonsa says Ma Ba Tha has 250 offices nationwide. He couldn’t estimate how many supporters it has, but in June more than 1,500 people attended the group’s annual conference in Yangon.
Ma Ba Tha recently struck a deal with Myanmar’s popular satellite television provider, SkyNet, to broadcast its sermons.
The broadcasts would help the public “know the truth” about Ma Ba Tha, said Khine Khine Tun, 25, an articulate former teacher and interpreter who heads the group’s international relations department.
Through media training courses, she said, she has learnt to speak to visitors with a smile, confounding expectations of the abrasive and sometimes confrontational style for which the group is known.
The television deal bolsters an information campaign that already includes a bi-monthly magazine with a circulation of 50,000 that contains sermons delivered by Ma Ba Tha monks nationwide.
RACE AND RELIGION
In contrast to long-delayed legislation on banking, mining and property, the Ma Ba Tha-backed “race and religion” bills moved swiftly through parliament.
One bill requires some women to wait at least three years between pregnancies. Another requires Buddhist women to seek official permission before marrying a non-Buddhist man.
This will stop Muslim men “torturing and forcing (Buddhist women) to change religion,” Ashin Tilawkar Biwonsa said.
Suu Kyi and her NLD opposed the laws. But government officials and politicians rarely criticize Ma Ba Tha, because they either sympathize with the group’s views or fear upsetting its many supporters during an election year.
“They are afraid of Ma Ba Tha,” said May Sabi Phyu, the director of the Gender Equality Network, a women’s empowerment group that opposed the bills.
Any plans to sway voters would be “violating the law,” said NLD spokesman Nyan Win, adding: “It’s the government’s responsibility to control and stop them.” 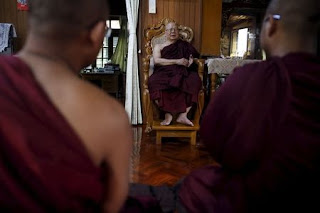