Share
Facebook Twitter LinkedIn StumbleUpon Tumblr Pinterest Reddit WhatsApp Telegram Share via Email Print
Share
Former Greek premier Alexis Tsipras urged supporters on Saturday to give him a fresh mandate to complete the country’s political transformation, as polls showed his leftist Syriza party’s lead slipping ahead of elections next month.
Tsipras abruptly resigned last week, days after clinching an 86 billion-euro ($97 billion) bailout package from Greece’s euro zone and International Monetary Fund lenders, aiming to crush a rebellion by far-left lawmakers and tighten his grip on power.
Hopes the lenders might soon resolve differences over how to tackle Greece’s existing debt rose on Saturday, when IMF head Christine Lagarde told a Swiss newspaper a form of restructuring rather than outright forgiveness should enable the country to cope. Euro zone creditors, notably Germany, have ruled out a writedown
But Tsipras’ gamble in calling early elections, to be held on Sept. 20, could backfire, opinion polls suggest – with most Greeks disapproving of his decision to seek a fresh mandate and how he handled the talks with creditors.
Syriza led the opposition conservative New Democracy party by as much as 15.2 percentage points in May. But the gap has been gradually whittled down since and it dropped to 1.8 points in an MRB poll for weekly Agora published on Saturday.
Other polls also showed the lead narrowing, suggesting momentum may be shifting towards New Democracy. An Alco poll for Sunday’s Proto Thema newspaper showed the gap between Syriza and New Democracy has shrunk to just 1.5 points.
“At the start of the race towards the Sept. 20 vote, the game looks open to all outcomes,” the paper said.
Another poll by Kapa Research for Sunday’s To Vima newspaper gave Syriza a wider lead – 27.3 percent against 24.2 percent for the conservative opposition – with 57.5 expressing a negative view on how the leftist government handled negotiations with the country’s international lenders.
MORE BATTLES AHEAD
Tsipras said he wanted to complete what he started when Syriza won national elections in January.
“Against us is the old political system that pushed the country into a tragedy, which built the regime that led to the bailouts,” he told a gathering of the party’s central committee in Athens. “We want to demolish this regime.”
He urged supporters to fight back against the old “hated” political system he held responsible for Greece having needed bailouts, and justified his decision to agree to a third rescue.
“We do not regret having fought nor having chosen at the end to avoid catastrophe,” he said.
“Whoever wants to escape has the right to do it but we are moving forward, we have not seen our best battles yet,” he said, in a reference to a breakaway Syriza faction that has formed the anti-bailout Popular Unity party.
The MRB poll showed Popular Unity backed by 4.2 percent – above the 3 percent threshold needed to enter parliament – while Syriza was on 24.6 percent and New Democracy 22.8.
It supported previous findings that Tsipras’s abrupt resignation as prime minister last week had gone down badly with voters, with 68.6 percent disapproving of the move.
All the recent surveys suggest Syriza has next to no chance of winning an overall majority, and the right-wing Independent Greeks, the allies in Tsipras’ former coalition government, look unlikely to make it back into parliament.
Tsipras this week however ruled out cooperating with the main pro-euro opposition parties – New Democracy, the Socialist PASOK and the centrist To Potami – and in an interview with Sunday’s RealNews newspaper he stuck to that stance.
“There is no way we will let the old, sinful political regime, to blame for today’s ills, in through the window to govern when the people have shown it the door,” he told the paper.
If Syriza is returned as the biggest party and Tsipras does not change his view, that points to a second round of elections. 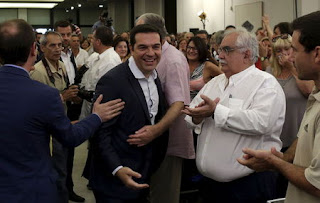