Share
Facebook Twitter LinkedIn StumbleUpon Tumblr Pinterest Reddit WhatsApp Telegram Share via Email Print
Share
Erika, a tropical storm that killed 20 people on the Caribbean island of Dominica and at least one person in Haiti, fell apart on Saturday over eastern Cuba, the U.S. National Hurricane Center said.
“Erika has degenerated into a trough of low pressure,” the Miami-based hurricane center said in a Saturday morning forecast advisory.
Erika’s maximum sustained winds had dropped to 35 mph (56 kph), just below the tropical storm threshold.
Still posing a threat of wind gusts and flash floods, the remnants of Erika were now expected to move over central Cuba, potentially providing welcome relief from a drought, before heading out into the Gulf of Mexico and skirting South Florida.
The NHC said the weather system could still regenerate into a tropical storm before reaching the northwest Florida Panhandle.
Florida Governor Rick Scott, who declared a state of emergency on Friday, said officials were closely watching the forecasts. “We know that when any weather system enters the Gulf it can bring a lot of rain to Florida,” he said in a press release.
Forecasters have described Erika, the fifth named storm of the Atlantic hurricane season, as unusually hard to predict due to disruption from wind patterns and interaction with mountainous terrain.
In impoverished Haiti, at least one man was killed in a mudslide in the town of Carries. His corpse lay in the remains of his mountainside shack.
“Thirteen houses were completely washed away last night,” said Brice Lefils, the principal of a local school.
However, Erika’s sustained winds dropped to 45 mph (72 kph) as it moved over the capital, Port-au-Prince, on Friday night, the NHC said. Haiti is acutely vulnerable to landslides due to widespread deforestation of its hillsides.
Dominica in the eastern Caribbean was the island worst-affected by Erika, with 20 killed and some still missing in swollen rivers and rain-triggered landslides that swept away homes, roads and bridges.
Dominica’s prime minister, Roosevelt Skerrit described the loss of life and economic damage as “monumental”, with some communities cut off on the small, mountainous island with a population of about 72,000. 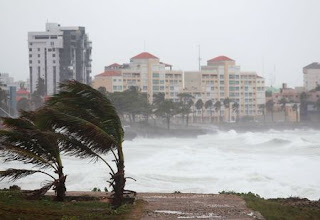