Share
Facebook Twitter LinkedIn StumbleUpon Tumblr Pinterest Reddit WhatsApp Telegram Share via Email Print
Share
Usain Bolt secured a sweep of the sprint golds at a world championships for the third time when he helped Jamaica’s relay team to a fourth successive 4×100 meters title on Saturday.
The 29-year-old, who had already won the 100 and 200 meters events, ran the anchor leg as the Jamaicans took gold in 37.36 seconds at the Bird’s Nest Stadium.
The United States team featuring Justin Gatlin, who won silver behind Bolt in both individual sprints, botched their final handover but crossed the line second in 37.77 with the bronze going to hosts China in 38.01.
It was a record-extending 11th world gold for Bolt, who also won three sprint titles at the 2009 and 2013 world championships.
His team mates Nesta Carter, Asafa Powell and Nickel Ashmeade helped extend Jamaica’s dominance of the sprint relay to a sixth straight major global championships, including the last two Olympics. 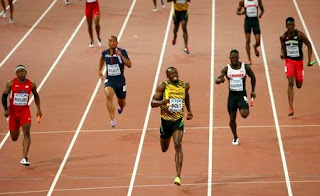