Share
Facebook Twitter LinkedIn StumbleUpon Tumblr Pinterest Reddit WhatsApp Telegram Share via Email Print
Share
Hungary called on Tuesday for more money from the European Union to handle a rising tide of migrants crossing the Balkans, as a new wave hit its southern border and further exposed the cracks in EU policy toward the worst refugee crisis since World War Two.
More than 100,000 migrants, many of them refugees from conflicts in the Middle East and Africa, have entered Hungary, part of Europe’s Schengen zone of passport-free travel, this year en route to the more affluent countries of western and northern Europe.
The influx ticked up on Monday to its highest daily rate this year – 2,093 – as many race to beat a fence that Hungary is building on its 175-km (110-mile) border with Serbia to keep them out.
A Reuters reporter saw hundreds stream unhindered into Hungary from Serbia on Tuesday, part of a larger movement in recent weeks whisked north by boat and bus as cash-strapped governments in Greece, Macedonia and Serbia try to move them on as fast as they can.
“We have skills, we can survive anywhere,” 30-year-old Hassan, an IT engineer from Syria, said after walking across the border into Hungary. “We don’t just come to Europe to eat and sleep. We’re looking for safety. It’s better to walk across half of Europe than to stay in Syria.”
A record 50,000, many of them Syrians, reached Greek shores by boat from Turkey in July alone. Greece, embroiled in a debilitating economic crisis, is ferrying them from overwhelmed islands to the mainland, from where they head north to Macedonia and points beyond.
Macedonia tried to keep them out last week with razor-wire and stun grenades, but gave up in the face of huge and determined crowds. The United Nations refugee agency, UNHCR, said it expected the influx into Macedonia to continue at a rate of 3,000 per day for months.
Some 8,000 were estimated to be in Serbia, many spending the night in city parks.
Belgrade’s Lasta bus company said it increased its daily departures to the northern town of Subotica from seven to 24. “In the coming days we may expect an increase,” the company told Reuters in an email.
Hungarian authorities are rolling out a low, barbed-wire barrier along the border with Serbia, while construction crews race to complete a more substantial 3.5-metre-high fence.
“EUROPE HAS FAILED”
Critics point out that the vast majority of migrants who enter Hungary do not linger, determined to reach the likes of Austria, Germany and Sweden where they join up with relatives and friends in search of work and security.
But the Hungarian government under right-wing Prime Minister Viktor Orban has taken a harder line than other EU states, saying such an influx carries risks of terrorism, crime and unemployment. He says the EU has failed to offer a coherent solution, and also faces pressure at home from far-right opponents.
Orban’s chief of staff, Janos Lazar, said Hungary should be given more money by the EU. The European Commission, the EU’s executive arm, has pledged nearly 8 million euros in aid and various other measures. But Lazar told the daily Magyar Hirlap newspaper it was not enough.
“The European Union distributes border protection funds in a humiliating way. Old member states have nicked the money from new members,” he was quoted as saying.
“If we do not take meaningful steps, we will become a lifeboat that sinks beneath the weight of those clinging onto it,” Lazar said in what appeared to be a reference to the deaths of over 2,000 migrants this year trying to reach Europe on overcrowded boats across the Mediterranean.
Not since the wars of Yugoslavia’s collapse in the 1990s has the cash-strapped western Balkans seen such large movements of people. Germany says it expects a record 800,000 asylum-seekers to arrive this year, in a crisis overwhelming authorities in Europe from the Greek islands to the French port of Calais.
The European Commission has made clear its disapproval of the Hungarian fence, with its Cold War echoes in ex-Communist eastern Europe, but Hungary faces no sanction for building it.
On Monday, Commission President Jean-Claude Juncker criticized bickering EU governments for “finger pointing” instead of confronting the migrant crisis with viable measures.
His deputy, Frans Timmermans, told Europe 1 radio on Tuesday that “Europe has failed. Europe has to get moving.”
“So far, many member states have thought they can go it alone. That doesn’t work. We have to do it together.” 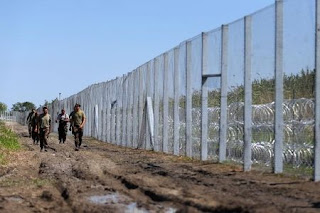