Share
Facebook Twitter LinkedIn StumbleUpon Tumblr Pinterest Reddit WhatsApp Telegram Share via Email Print
Share
Islamic State militants published photos on Tuesday purporting to show the destruction of a Roman-era temple in the central Syrian city of Palmyra, an act the U.N. cultural agency UNESCO has called a war crime.
Five photos were distributed on social media showing explosives being carried inside, being set around the walls of the temple, the large explosion and then rubble.
The militants blew up the temple of Baal Shamin on Sunday, according to the Syrian antiquities chief, but had not published visuals until now. Reuters could not independently verify the images.
The temple was built nearly 2,000 years ago and UNESCO has described it as a symbol of Syria’s historical cultural diversity, which it says Islamic State is seeking to obliterate. 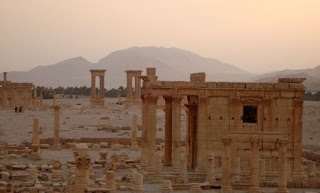