Share
Facebook Twitter LinkedIn StumbleUpon Tumblr Pinterest Reddit WhatsApp Telegram Share via Email Print
Share
Sentsov, 39, was arrested in May 2014 during a protest against Russia’s annexation of the Ukrainian peninsula two months earlier.
He denies the charges against him and his cause has been taken up by other directors, including Mike Leigh, Stephen Daldry and Pedro Almodovar.
Russia denies claims that he is a political prisoner.
Another Crimea activist, Alexander Kolchenko, who was being tried with Sentsov and also denies the charges against him, was sentenced to 10 years.
After the verdict was read out, both defendants sang the Ukrainian national anthem in the military court in the southern Russian city of Rostov-on-Don.

Sentsov, best known for his 2011 film Gamer, was accused of setting up a terrorist group and plotting to blow up a monument to Lenin in Crimea as well as conspiring to set fire to the Crimean offices of pro-Moscow political organisations.
The Ukrainian government says he is being punished for being a Crimea-based pro-Ukrainian activist.
The director insists the case is politically motivated, arguing that he was beaten in jail for 24 hours in an attempt to force a confession.
But investigators refused to open a case on his allegations of torture, suggesting that his bruises were self-inflicted and that he was keen on sado-masochism, his lawyer said.
Oleg Sentsov is one of a number of Ukrainian figures held by Russia. Military pilot Nadiya Savchenko is also facing trial in southern Russia, accused of killing two people.
The case against Sentsov is primarily based on evidence given by two men who have already been convicted and given seven-year jail terms.
Human rights groups condemned the verdicts, and UK Europe Minister David Lidington said he was “deeply concerned” at the sentencing of Sentsov and Kolchenko.
Meanwhile Ukrainian President Petro Poroshenko wrote on Facebook: “Hang on in there, Oleg. Time will pass, and those who organised this kangaroo court will find themselves in the dock.”
A petition calling for Sentsov’s release has been signed by top directors including European film-makers Mike Leigh, Ken Loach and Agnieszka Holland, and there has been a growing chorus of protest within the Russian film-making community. 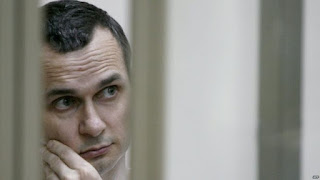