Share
Facebook Twitter LinkedIn StumbleUpon Tumblr Pinterest Reddit WhatsApp Telegram Share via Email Print
Share
Volatile global markets got some respite from their latest sharp sell-off on Tuesday as bargain hunters boosted European and most Asian stocks, though China was pummeled again.
As investors dipped their toes back into still choppy waters, the dollar and beaten-down oil prices rose for the first time in five days, safe-haven bonds edged down and defensive positions in the yen and euro were cut.
With market hopes of stimulus measures from authorities in Beijing still unfulfilled, China’s main equity markets slumped a further 8 percent overnight while Japan’s Nikkei lost 4 percent. But the rest of Asia was calmer, gaining 2.1 percent after an initial dip to three-year lows.
Europe fought its way back too, supported by takeover news after Monday’s global beating wiped around 450 billion euros ($520 billion) off the value of its leading stocks.
The pan-European FTSEurofirst 300 index rose 2.7 percent, recouping around half of the 5 percent-plus it lost the previous day as London, Paris and Frankfurt bounced 2.4-2.9 percent.
Hans Peterson, global head of asset allocation at SEB investment management said that, under current circumstances, Europe’s steady if unspectacular economic backdrop made its share markets relatively attractive.
“We still need to see some fundamental proof of stability (in emerging markets) but Europe (equities)… seem to be at a very good point. So I would prefer to go into them first,” he said
Swiss agricultural chemicals maker Syngenta bounced 9.0 percent after a source said Monsanto had sweetened a takeover bid, and British insurer RSA gained 4.7 percent after an offer from Zurich Insurance.
‘TRYING TO DECOUPLE’
“We are seeing signs of relief with European stocks opening higher despite China extending its losses,” said Piotr Matys, an emerging markets expert at Rabobank in London.
“We are trying to decouple but I think it’s too early to declare the worst is over… The way I see it is that this is a bit of a technical correction after things got a bit oversold.”
Valentijn van Nieuwenhuijzen, head of multi-asset strategy at NN Investment Partners, agreed Monday’s market moves had gone too far.
“There are solid reasons to be worried about the global growth outlook.. However, it is a risk – not yet a reality – (and) …Europe, US, Japan all show domestic demand is holding up quite well so far,” he said.
The currency market was also calmer. The dollar, pulling out of a four-day slide that had left it at a seven-month low, rose against the yen.
Traders said a rise in U.S. stock index futures helped spur dollar-buying earlier in the day and it rose to 120.11 yen at one point. The dollar slipped as a rebound in Japanese stocks petered out, but it still traded up around 1 percent at 119.68 yen and rose 0.35 percent against its currency basket.
The euro eased to $1.1552 having set a seven-month peak of $1.1715 on Monday, with a rise in Germany’s bellwether IFO business climate index in August having little immediate impact.
German Bund yields rose as the previous day’s rush for safety eased, with the 10-year benchmark up 6 basis points at 0.64 percent. U.S. Treasuries did likewise.
But the overall picture was mixed.
Mainland Chinese shares had another calamitous day with the Shanghai Composite Index breaking below 3,000, having fallen 15 percent over the previous three days.
“Global investors are cannibalizing each other. Calling it a market disaster is not an overstatement,” said Zhou Lin, an analyst at Huatai Securities.
“The mood of panic is dominating the market … And I don’t see any signs of meaningful government intervention.”
The continued weakness in China kept pressure on crude oil markets which, while recovering slightly from Monday’s 6 percent drop, held not far from 6-1/2-year lows.
U.S. crude futures traded at $38.79 per barrel, up 1.9 percent on the day, while Brent stood up 1.8 percent at $43.44.
Copper, often considered a proxy for global economic activity, edged down a fraction to $4,941 a tonne. 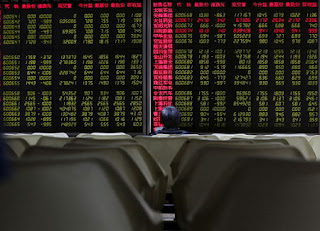 Blatter says I will be appreciated when I've gone