Share
Facebook Twitter LinkedIn StumbleUpon Tumblr Pinterest Reddit WhatsApp Telegram Share via Email Print
Share
China’s central bank cut interest rates and simultaneously relaxed reserve requirements for the second time in two months on Tuesday, cranking up support for a stuttering economy and a plunging stock market that has sent shockwaves around the globe.
The People’s Bank of China (PBOC) said on its website that it was lowering the one-year benchmark bank lending rate by 25 basis points to 4.6 percent, effective from Aug. 26.
The central bank also reduced one-year benchmark deposit rates by 25 basis points, it said.
At the same time, the PBOC said it was also lowering the reserve requirement ratio by 50 basis points to 18.0 percent for most big banks. The change will be effective on Sept. 6.
The move comes after Chinese stock indexes nosedived more than 7 percent, hitting their lowest levels since December, following their more than 8 percent plunge on Monday.
The central bank shocked global markets by devaluing the yuan by nearly 2 percent on Aug. 11. The PBOC called it a free-market reform but some saw it as the start of a long-term yuan depreciation to spur exports. 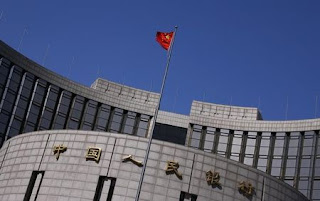