Share
Facebook Twitter LinkedIn StumbleUpon Tumblr Pinterest Reddit WhatsApp Telegram Share via Email Print
Share
Outgoing FIFA president Sepp Blatter believes his critics will realize they have been wrong and will recognize his achievements once he has left soccer’s world governing body.
In an interview with the BBC, the 79-year-old Swiss defended his record at the head of scandal-plagued FIFA and said he was respected in many parts of the world.
Blatter noted he was often subjected to hostile treatment on social media but said: “Go to the world, go to Asia, go to Africa… go to China, ask them what they think about FIFA and Blatter, that’s different.
“At least (I am) respected because I have done a lot. Not only me but FIFA has done a lot and I have served this FIFA. I am sure this will be recognized, that the big job that has been done by FIFA and by myself… (over) 40 years.
“I am sure people are realizing that the job I have done in FIFA is a good job, it’s the right job for the development of football, the right job for education of youth,” he added.
“If there are people who don’t like the organization or don’t like me, they will realize they have been wrong… they will realize that.”
Blatter was re-elected for a fifth term on May 29 but four days later announced he would lay down his mandate as FIFA was engulfed in the worst crisis in its 111-year history.
FIFA was thrown into turmoil when 14 sports marketing executives and soccer officials, including several from FIFA, were indicted in the United States in late May on bribery, money laundering and wire fraud charges involving more than $150 million in payments.
Seven of those accused were arrested by Swiss police in a dawn raid on a luxury Zurich hotel two days before the FIFA Congress where Blatter was re-elected.
Blatter’s replacement is due to be elected at an extraordinary Congress on Feb. 26.
Blatter, often looking uncomfortable during the 20-minute interview at FIFA headquarters, reiterated that it was individuals rather than FIFA who were under investigation.
“The institution is not corrupt… there is no corruption in football, there is corruption with individuals,” he said.
He also repeated his criticism of the method for choosing the FIFA executive committee, whose members are elected by the continental confederations rather than the FIFA Congress.
“I have to take people, they are not my people,” he said. “I cannot be morally responsible for other people.” 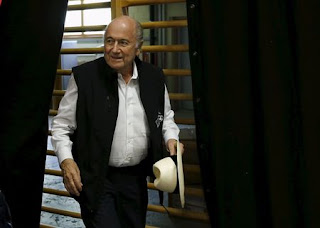