Share
Facebook Twitter LinkedIn StumbleUpon Tumblr Pinterest Reddit WhatsApp Telegram Share via Email Print
Share
Police on Tuesday questioned a taxi driver who may have driven the main suspect away from the area of last week’s deadly attack in Bangkok, as forensic experts struggle to unearth vital evidence in Thailand’s worst ever bombing.
Broken security cameras along the chief suspect’s getaway route and a lack of sophisticated equipment has hampered the investigation into the Aug. 17 blast that killed 20 people, more than half of them foreigners.
On Monday police said the trail had gone cold in the hunt for the bomber, and they were unsure if the main suspect was still in Thailand.
The main evidence police have for the blast at the Hindu Erawan Shrine popular with Asian tourists is grainy security camera footage.
The footage shows a man with a yellow shirt and dark hair removing a backpack after entering the packed shrine and calmly walking away from the scene before the explosion.
The suspect is seen taking a motorcycle taxi from the shrine, and a short time later is believed to switch to a taxi car.
The driver of the car, who spoke to reporters before being interviewed by police, said he picked up a man who “spoke Thai with a foreign accent” and looked foreign, a description that matches a police warrant circulated last week.
He drove the man from Rama IV road, a main thoroughfare in Bangkok’s central business district, and dropped him off near Hua Lamphong station, the city’s main train station.
Police on Tuesday said the search for those behind the attack, which took place less than 300 meters from the national police headquarters, has narrowed, as they come under increasing public pressure to catch perpetrators.
Police spokesman Prawut Thawornsiri said police have “cut out a lot of suspects” but that he still could not confirm the nationality of the man seen in video footage.
The government has said the attack was aimed at undermining the economy by hurting the tourism industry as growth flags in other sectors. Half of the 14 foreigners killed were from mainland China or Hong Kong.
Zhang Kejia, from the Beijing-based China Comfort Travel Agency, said trips by Chinese to Thailand have not been affected. “We’ve basically not had anyone cancel because of the bombing,” Zhang told Reuters.
Data from research firm ForwardKeys, which analyses over 14 million travel booking transactions a day, paints a different picture. In the five days following last week’s bombing, travel bookings to Thailand suffered a 65 percent drop compared to the same period last year.
Business travel from China to Thailand saw a drop of more than 350 percent, it said in a note on Tuesday. 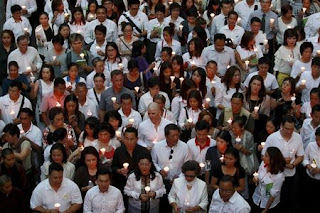