Share
Facebook Twitter LinkedIn StumbleUpon Tumblr Pinterest Reddit WhatsApp Telegram Share via Email Print
Share
Japan on Saturday lodged a protest over Russian Prime Minister Dmitry Medvedev’s visit to one of four Pacific islands it also claims, and which have strained ties between the neighbors since the end of World War Two.
The protest over the disputed islands could set back Japanese Prime Minister Shinzo Abe’s efforts to court resource-rich Russia and keep the door open to dialogue, despite the Ukraine crisis.
Tokyo and Moscow have been involved in a decades-old dispute over the islands north of Hokkaido, which are known in Russia as the Kuriles, and referred to as the Northern Territories in Japan.
Russia seized them in the waning days of World War Two and the dispute has kept the two countries from signing a formal peace treaty.
After Medvedev visited Iturup island on Saturday, senior Japanese foreign ministry official Hajime Hayashi lodged the protest with the Russian ambassador to Japan, Evgeny Afanasiev, over the telephone, the Japanese ministry said.
Japanese Foreign Minister Fumio Kishida will delay a visit to Russia that had been arranged for the end of August, the Nikkei business daily said, but did not elaborate.
Medvedev’s visit is likely to have an adverse impact on Russia’s relations with Japan, which had been looking to arrange a visit this year by Russian President Vladimir Putin for summit talks with Abe, Kyodo news agency said.
Russia ordered a quicker build up of military facilities in the disputed islands in June, following comments by Putin in April that he was ready to discuss the issue, while blaming Japan for a lack of dialogue.
Energy interests drive the effort for closer ties between Japan and Russia.
Russia plans to at least double oil and gas flows to Asia in the next 20 years and Japan has been forced to resort to huge fuel imports to replace lost nuclear energy, after its reactors were shut down because of the 2011 Fukushima disaster caused by a massive earthquake and tsunami. 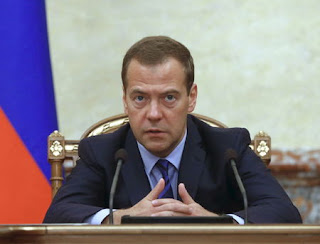