Share
Facebook Twitter LinkedIn StumbleUpon Tumblr Pinterest Reddit WhatsApp Telegram Share via Email Print
Share
South Korea stands ready to respond to further provocations from North Korea, the presidential Blue House said on Saturday, as an ultimatum loomed for Seoul to halt anti-Pyongyang propaganda broadcasts by late afternoon or face military action.
Tension on the Korean peninsula has been running high after an exchange of artillery fire on Thursday, prompting calls for calm from the United Nations, the United States and the North’s lone major ally, China.
North Korea, technically still at war with the South after their 1950-53 civil conflict ended in a truce, not a treaty, has declared a “quasi-state of war” in front-line areas and set a deadline of 5 p.m. Pyongyang time for Seoul to halt the broadcasts from loudspeakers along the border.
Seoul says it will continue the broadcasts unless the North accepts responsibility for landmine explosions this month in the Demilitarised Zone (DMZ) that wounded two South Korean soldiers. Pyongyang denies it planted the mines.
South Korean Vice Defence Minister Baek Seung-joo said on Friday his government expected North Korea to fire at some of the 11 sites where Seoul has set up loudspeakers.
A military source told South Korea’s Yonhap News Agency on Saturday that there were signs the North’s military was preparing to attack the loudspeakers, towing artillery to near the border. The defense ministry said it was checking the report.
“The Blue House is calmly observing the situation and ready to respond strongly against any additional provocations,” a spokeswoman told Reuters.
The top U.S. military officer, General Martin Dempsey, reaffirmed Washington’s commitment to the defense of ally South Korea in a telephone call between the chairmen of the two countries’ Joint Chiefs of Staff, the South Korean side said.
North and South Korea have often exchanged threats over the years, and dozens of soldiers have been killed in clashes, yet the two sides have always pulled back from all-out war. Analysts expect this crisis eventually to wind down.
But the tension represents a blow to South Korean President Park Geun-hye’s efforts to improve North-South ties, which have been virtually frozen since the deadly 2010 sinking of a South Korean warship. North Korea denies it was involved.
“The whole situation on the Korean peninsula has been bad for years now, because there’s very little intra-Korean contact and that only makes a bad situation worse,” said Joel Wit of 38 North, a North Korea monitoring project at Johns Hopkins University in Washington.
North and South Korea traded harsh rhetoric late into Friday night.
South Korean government employees were ordered into emergency duty starting Friday, meaning they must work until 11 p.m., including during the weekend, the Ministry of Personnel Management told Reuters
FOOTBALL TOURNAMENT
Residents of a village in Paju, near the border next to the area where a shell landed on Thursday, anxiously awaited the deadline and prepared to head into a bomb shelter, the head of the township of Haemaru, Cho Seong-ho, said by telephone.
At the jointly-run Kaesong Industrial Complex just north of the border, the last significant vestige of cooperation spawned by the rivals’ first summit meeting 15 years ago, entries and exits were proceeding as normal, Yonhap said.
South Korea’s unification minister said it was considering bringing home 83 South Koreans who are in Pyongyang for a youth
football tournament if the situation worsens, YTN TV reported.
South Korea began blasting anti-North propaganda over the DMZ on Aug. 10, resuming a tactic both sides had stopped in 2004, days after the landmine incident.
North Korea resumed its own broadcasts on Monday and on Thursday, according to Seoul, launched four artillery shells into South Korea in apparent protest at the broadcasts. The South fired back 29 artillery rounds. Pyongyang accused the South of inventing a pretext to fire into the North.
Neither side reported casualties or damage.
The United States, which has 28,500 military personnel based in South Korea, said on Friday it had resumed its annual joint military exercises there after a temporary halt to coordinate with Seoul over the shelling from North Korea. [ID:nL1N10W1F1]
The drills, code-named Ulchi Freedom Guardian, began on Monday and run until next Friday.
North Korea regularly condemns the maneuvers as a preparation for war and in the past has fired rockets into the sea while they proceeded.
North Korea has been hit with UN and U.S. sanctions because of its nuclear and missile tests, moves that Pyongyang sees as an attack on its sovereign right to defend itself. 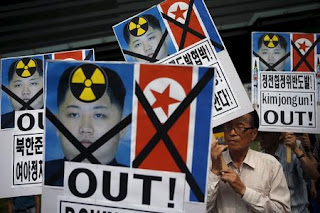