Share
Facebook Twitter LinkedIn StumbleUpon Tumblr Pinterest Reddit WhatsApp Telegram Share via Email Print
Share
White Sox left-hander Chris Sale continued to pile up strikeouts Friday night, when he fanned 14 Seattle Mariners and led Chicago to an 11-4 win at Safeco Field.
Sale recorded his 12th double-digit strikeout game of the season, and the 30th of his career. His 29 strikeouts in back-to-back starts are a career high.
He easily outdueled Seattle starter Felix Hernandez, who struggled for the fourth time in five starts. Sale (12-7) allowed three runs, all of them coming on a Mark Trumbo homer in the seventh, on four hits and one walk over seven innings.
Sale has 222 strikeouts on the season, the most in the American League and four short of his career high for a season. He struck out 15 on Sunday in a 3-1 win over the Chicago Cubs.
Second baseman Carlos Sanchez drove in four of Chicago’s 11 runs, the most the White Sox scored in a game since April 18.
Sanchez’s two-run double in the sixth inning gave the White Sox a 4-0 lead on Hernandez, but Trumbo closed the gap to 4-3 in the seventh.
Chicago (57-63) erupted for four runs off the Seattle bullpen in the eighth, effectively ending that threat. Seattle reliever Rob Rasmussen issued back-to-back walks with the bases loaded, and then White Sox third baseman Tyler Saladino delivered a two-run single to put Chicago ahead 8-3.
Hernandez (14-8) continued his late-season fade, allowing four runs on nine hits over six innings. His season ERA has swelled from 2.69 to 3.74 since July 29.
The first batter Sale faced, Seattle shortstop Ketel Marte, was awarded a double on a fly ball that bounced off the glove of Chicago right fielder Avisail Garcia. That ruling began to loom large when Sale made it through six innings without giving up another hit.
However, the Mariners (56-66) ended the controversial-one-hitter talk by leading off the seventh with back-to-back singles from right fielder Nelson Cruz and second baseman Robinson Cano to set the table for Trumbo’s home run.
Cruz extended his streak of games reaching base to 31. He added a solo homer, his 37th of the season, off Chicago reliever Zach Duke in the bottom of the ninth.
Seattle manager Lloyd McClendon got tossed from the game during a rough top of the eighth for his team. After going out to the mound to make his third pitching change of the inning, McClendon threw a few words toward plate umpire Quinn Wolcott, who ejected him.
Sanchez went 2-for-4 with a pair of doubles. Saladino added three hits on a night when the White Sox pile up 16 hits, one short of their season high.
Designated hitter Jose Abreu gave Chicago a 1-0 lead with a no-out, RBI double in the fourth inning. Abreu was sacrificed to third base but ended up getting stranded there when Hernandez recorded his first two strikeouts of the game on back-to-back at-bats.
Hernandez gave up three singles to the first four batters he faced in the fifth, with center fielder Adam Eaton’s one-out shot up the middle resulting in an RBI and a 2-0 White Sox lead. 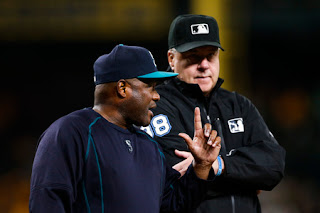