Share
Facebook Twitter LinkedIn StumbleUpon Tumblr Pinterest Reddit WhatsApp Telegram Share via Email Print
Share
By David Alexander
The fight against Islamic State rebels is at a stalemate and if the U.S. military does not see progress in the coming months it should consider putting support troops on the ground with Iraqi forces, Army General Ray Odierno said on Wednesday.
Odierno, the outgoing Army chief of staff, backed the current strategy against Islamic State, telling his last Pentagon news conference that while U.S. troops could defeat the militants, they could not solve the broader political and economic problems besetting Iraq and Syria.
“We could probably go in there with a certain amount of American force and … defeat ISIL. The problem is we would be right back where we are today six months later,” he told reporters, using an acronym for Islamic State.
“For me it’s about changing the dynamics, the political dynamics, the economic dynamics, and it has to be done by those in the region,” he said.
Odierno, who has spent most of the last two decades dealing with the conflicts in Iraq, is retiring and will be succeeded on Friday by General Mark Milley, current head of U.S. Army Forces Command.
Odierno commanded the 4th Infantry Division at the outset of the Iraq war and said it was “frustrating” to see what happened in Baghdad after U.S. forces withdrew in 2011.
He said a U.S.-led bombing campaign had helped blunt the offensive by Islamic State, which overran the northwestern part of Iraq last year, but said “right now we are kind of in a stalemate, frankly.”
“We have gained back some territory, mostly by the great work of the Kurds, some work by the Iraqi security forces,” he added, noting the Kurds were continuing to make some progress.
Asked if the United States should put troops on the ground, Odierno said if the U.S. military is not making the kind of progress it needs in the next few months, “we should probably absolutely consider embedding some soldiers (with Iraqi forces), then see if that would make a difference.”
“That doesn’t mean they would be fighting, but … they would be abetting them and moving with them,” he added. “I think that’s an option we should present to the president when the time is right.”
Some lawmakers have criticized the current strategy, saying some U.S. troops should be deployed with Iraqi forces to help the air campaign by identifying targets and calling in air strikes. 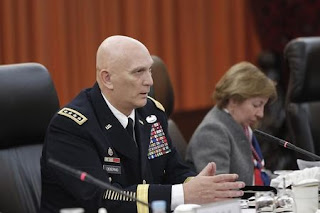