Share
Facebook Twitter LinkedIn StumbleUpon Tumblr Pinterest Reddit WhatsApp Telegram Share via Email Print
Share
Two massive explosions caused by flammable goods rocked an industrial area in the northeast Chinese port city of Tianjin late on Wednesday, killing 13 people and injuring around 250, the official China Daily newspaper reported.
Pictures posted on Chinese media websites showed fire shooting into the air, nearly twice the height of nearby apartment buildings. Residents and workers, some bleeding, could be seen fleeing the scene.
State broadcaster China Central Television (CCTV) said the blasts erupted in a shipment of explosives at around 11:30 p.m. local time, triggering a blast wave that was felt kilometers (miles) away.
The second blast came roughly 30 seconds after the first, CCTV and the official Xinhua news agency said.
Canadian teacher Monica Andrews told the BBC that she awoke in panic after what she thought was an earthquake.
“I … looked out the window and the sky was red … I just watched a second explosion go off and (it was) just pure chaos, everyone leaving their apartment buildings thinking it’s an earthquake, cars trying to leave the complex and … it was crazy the amount of light that this explosion and fire lit up,” she said.
Xinhua said the explosions had ripped through a warehouse storing “dangerous goods”. The first explosion was equivalent to 3 tonnes of TNT and the second blast 21 tonnes of TNT, it said.
Residents in nearby areas said the blasts had shattered windows in buildings, it reported.
Citing a local hospital, Xinhua said people had been hurt by broken glass and stones and some were seriously injured.
CCTV said on its website about 100 fire trucks had been sent to the scene.
Industrial accidents are not uncommon in China following three decades of breakneck economic growth. A blast at an auto parts factory in eastern China killed 75 people a year ago when a room filled with metal dust exploded. 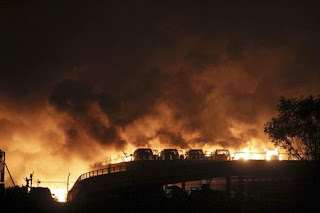 Retiring Army Chief Says Some U.S. troops may be needed on ground in Iraq