Share
Facebook Twitter LinkedIn StumbleUpon Tumblr Pinterest Reddit WhatsApp Telegram Share via Email Print
Share
China’s yuan fell for a third straight day on Thursday to a fresh 4-year low, but traders said the central bank intervened through state-owned banks to limit losses and ease global fears that Beijing may be considering a deeper devaluation.
Traders said the central bank appeared to have been caught off guard by the intensity of selling that was sparked off by its surprise 2 percent devaluation on Tuesday, and believe it ordered big state banks to support the currency late on Wednesday. State banks were also believed to be buying on Thursday to stem declines.
The People’s Bank of China set the midpoint rate at 6.4010 per dollar prior to market open, weaker than the previous fix of 6.3306 but near the prior market close. The weaker fixing follows through on its commitment to set the midpoint with a closer eye on the previous day’s closing rate, seen as making the fixing more responsive to market forces.
The spot market closed at 6.3990 per dollar, weakening 0.2 percent from the previous close and has depreciated 3 percent since the central bank devalued the currency.
The PBOC moved to calm markets again on Thursday, saying there was no basis for further depreciation of the yuan given the country’s strong economic fundamentals, ample foreign exchange reserves and a trade surplus.
It signaled it believed the yuan had found its proper new level and sources told Reuters it stepped up intervention in trading by ordering state banks to buy yuan at designated rates on behalf of the monetary authorities.
“Some major, sporadic transactions emerged today, suspected coming from state banks to help the PBOC to support the yuan,” said a trader at a European bank in Shanghai.
“They concentrated at 6.43-6.44 per dollar, implying that is roughly the line where the central bank thinks the yuan should not fall below in the near term.”
The spot rate is currently allowed to trade with a range 2 percent above or below the official fixing on any given day, and had been trading far weaker than the midpoint for months until Tuesday’s sudden adjustment.
Central bank officials denied suggestions that they were preparing to push the currency down 10 percent in order to support exports.
The offshore yuan was trading 0.76 percent weaker than the onshore spot at 6.448 per dollar. 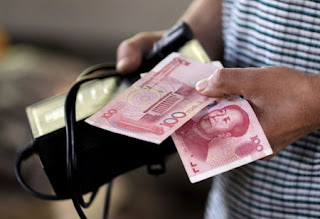 Retiring Army Chief Says Some U.S. troops may be needed on ground in Iraq

Turkey does not plan to send ground forces to Syria