Share
Facebook Twitter LinkedIn StumbleUpon Tumblr Pinterest Reddit WhatsApp Telegram Share via Email Print
Share
The head of world athletics launched a vigorous defense of the IAAF’s anti-doping record on Monday, as global sporting bodies called for a thorough probe of the latest doping allegations to plunge track and field into crisis.
IAAF president Lamine Diack said in response to reports of suspected widespread blood doping that any suggestion his organization had been negligent was “laughable”.
“There are allegations made, no evidence. We want to look into them seriously because to say that in athletics between 2001 and 2012 we did not do a serious job with tests is laughable,” Diack told Reuters.
Britain’s Sunday Times newspaper and Germany’s ARD/WDR broadcaster reported on Sunday they had obtained secret data from the IAAF, supplied by a whistleblower.
The reports, only weeks before track and field’s showpiece event, claim endurance runners suspected of doping had been winning a third of the medals at Olympic Games and world championships in that period.
The allegations have not been verified by Reuters. The reports did not say that any athletes had failed doping tests, only that the tests had been abnormal, which can sometimes be a sign of cheating.
There was no clear evidence to explain the Sunday Times and ARD/WDR reports but the allegations are the latest setback to tarnish the multi-billion dollar world of sport after the scandal at soccer’s global governing body, FIFA.
Athletics are a central part of the Olympics, the only sporting event that rivals soccer’s World Cup in scale and which collects billions of dollars from sponsors like Coca-Cola, Panasonic, Visa and McDonald’s.
International Olympic Committee (IOC) President Thomas Bach told reporters on Monday that he had spoken to the World Anti-Doping Agency (WADA) head Craig Reedie and had full confidence in that body to investigate the claims thoroughly.
“I don’t know about the detailed allegations, which athletes, which competitions are affected,” he said. “I had the conversation with the WADA president this morning … and agreed WADA is our competent center for the fight against doping. They will inquire.”
Bach said the IOC would act with “zero tolerance” if there should be a case involving results at an Olympic Games.
“But at this time we have nothing more than allegations and we have to respect the presumption of innocence for the athletes,” he said.
“I LAUGHED”
Medals won could be affected if any cases of doping were subsequently unearthed using newer testing techniques that did not exist at the time.
“I do not know what we are dealing with,” Senegal’s Diack said. “It is possible if we discover with new techniques that someone doped etcetera, etcetera then yes, otherwise no.”
“But I laughed when I read between 2001 and 2012 IAAF did not do the work, I laughed because Arne (Ljungqvist) was there, an expert, he was the head of the medical commission of the IOC, a vice president of WADA, a man who did everything in the battle against doping.”
The reports come weeks before a new IAAF president will be elected, with Britain’s Sebastian Coe and Sergey Bubka of Ukraine bidding to replace the retiring Diack.
Sheikh Ahmad Al-Fahad Al-Sabah, one of the most influential figures in world sport, appeared skeptical about the timing of the allegations ahead of that election.
The Kuwaiti, who serves as the head of the Olympic Council of Asia and the Association of National Olympic Committees, told Reuters: “I’m hearing all those news (but) I don’t have the big picture.”
“If there is some mess I hope it will be solved by the mechanism of the governance and anti-doping. If not, related to election time I will understand it.”
Earlier, U.S. anti-doping agency chief executive Travis Tygart said an “aggressive review” was needed to protect clean athletes. WADA has said it was “very disturbed” by the reports.
Tygart, who told Reuters he was unaware of any American involvement in the report, said: “This is more evidence of what many of us already suspected.”
The IAAF, yet to offer a detailed response to the contents of the reports, noted they were based on confidential information obtained without permission.
A heavy preponderance of the “abnormal” results were from Russian athletes, according to the media reports. Russian sports minister Vitaly Mutko has said the allegations had “nothing to do with Russia” and that they reflected a power battle before the IAAF leadership vote.
The IAAF’s world athletics championships kick off in Beijing on Aug. 22.
In the report, Australian doping expert Robin Parisotto and another scientist, Michael Ashendon, concluded that more than 800 athletes had recorded one or more “abnormal” results, defined as a result that had less than one chance in 100 of being natural.
Such athletes accounted for 146 medals at top events, including 55 golds, the Sunday Times said.
Russia accounted for 415 abnormal tests, followed distantly by Ukraine, Morocco, Spain, Kenya, Turkey and others.
“A remarkable 80 percent of Russia’s medal winners had recorded suspicious scores at some point in their careers,” the Sunday Times said.
The allegations concern techniques to improve the ability of blood to carry oxygen, which can give an advantage in endurance events like cycling or running over medium and long distances.
The Sunday Times and ARD said they were given access to the results of more than 12,000 tests of more than 5,000 athletes taken between 2001 and 2012.
They showed the data to two experts, who concluded distance running was in the same state as cycling had been when Lance Armstrong won the seven Tour de France victories of which he has since been stripped.
“Never have I seen such an alarmingly abnormal set of blood values,” the Sunday Times quoted Parisotto as saying.
“So many athletes appear to have doped with impunity, and it is damning that the IAAF appears to have sat idly by and let this happen,” said Parisotto, an inventor of the test used to detect the blood doping agent EPO. 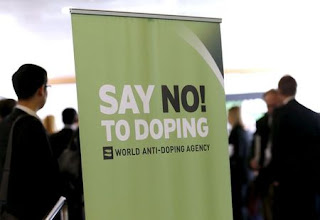