Share
Facebook Twitter LinkedIn StumbleUpon Tumblr Pinterest Reddit WhatsApp Telegram Share via Email Print
Share
Andre Ethier hit a solo home run in the bottom of the eighth and a two-run shot in the 10th as the Los Angeles Dodgers completed a three-game sweep of the Freeway Series, handing the Los Angeles Angels a 5-3 defeat at Dodger Stadium on Sunday.
Ethier had not hit a home run since June 29, a span of 20 games, before the eighth-inning shot off Angels reliever Joe Smith and had not had a multi-homer day in more than four years.
“Not too many times in baseball you get to take the last shot. That was one of them right there,” Ethier told reporters of his walk-off blast.
The Dodgers are winners of six in a row against their southern California neighbors, the longest winning streak for either team in this inter league matchup.
The Angels, meanwhile, will lick their wounds all the way back down the I-5 Freeway after going 0-6 on a six-game road trip to Houston and Los Angeles.
The Angels have lost nine of their past 10 overall to fall four games behind the Astros in the AL West.
“We didn’t lose today because of yesterday’s game. We didn’t lose yesterday because of the day before,” Angels manager Mike Scioscia said of the slump.
“We played three games here. If some things had turned out a little differently, we win three. It ends up we lose three. This is just a stretch. We’re a good team.”
The Dodgers dominated the weekend series with starting pitchers Zack Greinke, Clayton Kershaw and Mat Latos. That trio allowed just three runs on 11 hits over 22 innings in the series.
Making his first start for the Dodgers since being acquired in a trade-deadline deal with the Miami Marlins, Latos went six innings and allowed just one run on four hits and a walk.
“Mat was really good I believe,” Dodgers manager Don Mattingly said. “Kind of what we’ve seen in the past… he’s aggressive. You don’t see any fear in him at all.”
The win completed a 4-1 homestand for the Dodgers, who moved a season-high 15 games over .500 (60-45) and 2 1/2 games ahead of the San Francisco Giants in the National League West.
“Since the (All-Star) break, I think we’ve played pretty good baseball. I felt we’ve been ready to play,” Mattingly added. “I think offensively we’ve had good quality at-bats. Guys are doing the job. We’re getting good pitching.
“But obviously, this one, you enjoy it for a little bit. But there’s a lot of baseball to be played.” 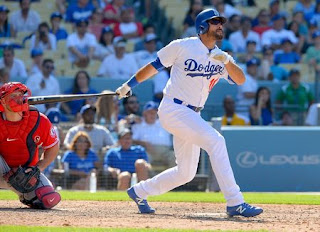