Share
Facebook Twitter LinkedIn StumbleUpon Tumblr Pinterest Reddit WhatsApp Telegram Share via Email Print
Share
Russia’s central bank cut its key interest rate by 50 basis points to 11 percent on Friday as expected, saying risks of the economy cooling now outweighed inflation risks.
“The balance of risks shifts towards the considerable economic cooling despite a slight increase in inflation risks,” the bank said in a statement.
The bank also said that an unexpectedly severe contraction in domestic demand in the first half of 2015 meant that it may revise down its output forecast. The bank had previously forecast a 3.2 percent GDP contraction in 2015.
The 50 basis point cut means the central bank has now cut its one-week minimum auction repo rate by a cumulative 6 percentage points in 2015 .
Analysts had expected a cautious half-point cut rather than a bigger one because a recent slide in the rouble threatens to reignite inflation.
The rouble, which had already been down over 1 percent before the central bank decision, fell further after the cut. At 1112 GMT the rouble was down around 2.1 percent at 61.00 against the dollar .
In its statement the bank said consumer price inflation stood at 15.8 percent as of July 27, up from 15.3 percent in June, but it called the acceleration a temporary result of utility tariff increases.
It predicted that inflation would fall to 7 percent in July 2016 and to 4 percent in 2017, meeting the bank’s target, with low money supply growth and slack domestic demand helping to bring inflation down.
“The Bank of Russia will further decide on its key rate depending on the balance of inflation risks and risks of economy cooling,” the bank said – a more dovish outlook compared with last month when the bank had described potential for monetary easing as “limited by inflation risks in the next few months”. 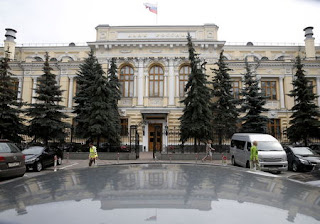