Share
Facebook Twitter LinkedIn StumbleUpon Tumblr Pinterest Reddit WhatsApp Telegram Share via Email Print
Share
A court in Libya has sentenced Col. Muammar Gaddafi’s son, Saif al-Islam, and eight others to death over war crimes linked to the 2011 revolution, the BBC reports.
They were on trial along with dozens of other close associates of the deposed leader, accused of suppressing protests during the uprising.
Saif al-Islam was not present in court and gave evidence via video link.
He is being held by a former rebel group from the town of Zintan that refuses to release him. 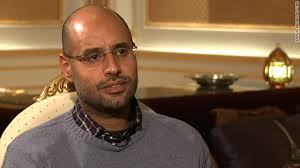 Facebook Investors in the options market are betting on more gains.