Share
Facebook Twitter LinkedIn StumbleUpon Tumblr Pinterest Reddit WhatsApp Telegram Share via Email Print
Share
Pope Francis said on Sunday the mistreatment of migrants escaping war and injustice “makes one cry” as he visited the northern Italian city of Turin, stopping to pray before an icon some Christians believe is Jesus’ burial cloth.
The Church has not taken an official position, saying the mysterious cloth known as the Shroud of Turin that has baffled scientists is at least a powerful reminder of Jesus’ suffering.
Francis was the latest in a string of popes to pray before the shroud, which is usually kept locked out of sight behind an altar, and is on display for only the third time in 17 years. More than a million people have seen it since the current display began in April.
Later at the end of a Mass for 60,000 people he said the Shroud should spur people to reflect not only on Jesus but also on “the face of every suffering and unjustly persecuted person.”
Francis, born Jorge Mario Bergoglio, is himself of immigrant stock and on Sunday called himself “a grandson of this land.” His grandparents and father emigrated to Argentina from the area around Turin.
In a morning outdoor talk to thousands of workers and unemployed people, he defended the right to employment and urged his listeners, although going through hard times, to help the 10 percent of the city’s population living in absolute poverty.
“Immigration increases competition but migrants should not be blamed because they are the victims of injustice, of this throw-away economy, of wars,” he said in the manufacturing district that was an engine of Italy’s post-war industrial rise.
Departing from his prepared text, he added. “It makes one cry to see the spectacle of these days in which human beings have been treated like merchandise.”
Italy’s right-wing Northern League, which has won votes from people who say migrants take resources from a long-stagnant economy, is very strong in the neighbouring Lombardy and Veneto regions.
Francis has made immigration a top priority of his papacy. His first trip in 2013 was to the southern island of Lampedusa to pay tribute to the thousands of migrants who have died trying to cross the Mediterranean.
France and Austria have stepped up border controls on migrants from Italy, turning back hundreds and leaving many camped out in train stations in Rome and Milan.
Francis later went to the cathedral where he sat in silent veneration before the shroud bearing an image, eerily reversed like a photographic negative, of a man with the wounds of a crucifixion.
Measuring 4.4 metres by 1.2 metres, it shows the back and front of a bearded man, his arms crossed on his chest. It is marked by what appear to be rivulets of blood from wounds in the wrists, feet and side.
Carbon dating tests by three laboratories in 1988 caused a sensation by dating it from between 1260 and 1390. Sceptics say it is a masterful medieval forgery but some have challenged the accuracy of those tests. 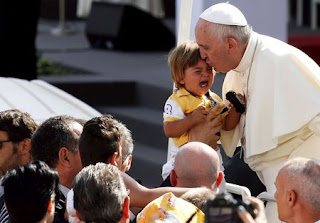 Modi seeks to turn yoga record on its head