Share
Facebook Twitter LinkedIn StumbleUpon Tumblr Pinterest Reddit WhatsApp Telegram Share via Email Print
Share
Indian Prime Minister Narendra Modi led tens of thousands of people in a yoga session in the center of the capital on Sunday to showcase the country’s signature cultural export, which has prompted criticism of fomenting social divisions at home.
The ancient Hindu discipline which has become an estimated $27 billion industry in the United States is being celebrated across the world as an International Yoga Day which Modi pushed for soon after taking power last year.
More than 35,000 people, clad in white, rolled out yoga mats at Rajpath, a ceremonial boulevard in Delhi, to perform 21 aasanas, or postures, that were kicked off by a prayer and chants of Om.
Modi, clad in loose kurta and trousers with a scarf depicting the colors of the Indian flag, also joined in the demonstrations, working on various parts of the body such as the neck and the spine. It ended with some light meditation.
“This program is only about human welfare, about freeing the universe from stress and about spreading the message of love, peace, unity and goodwill,” Modi said in a speech before the 35-minute session that was being marked across the country.
But activists and minority groups say Modi’s hardline Hindu nationalists are trying to force yoga on minority groups and schools.
Others said they practised the ancient discipline in any case in their personal lives and didn’t need Modi to tell them what to do.
“This is about the mind and the body. Let us not play politics with yoga,” Arvind Kejriwal, the chief minister of Delhi and a bitter Modi foe, said after taking part in the Delhi event.
More than 170 countries including the United States and France are expected to join in mass yoga gatherings. Indian Foreign Minister Sushma Swaraj will lead the event in New York’s Times Square.
Yoga, a discipline that dates back thousands of years, has gained immense international prominence over the last several decades as a holistic regime for the mind and body.
Modi set up a yoga ministry last year as part of efforts to reignite interest in its country of birth.
The government has also applied to the Guinness World Records to record Sunday’s event as the largest gathering of people doing yoga together in the capital. 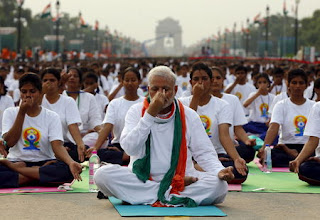