The United States
and Iran have flexed their military muscles in unprecedented ways in
Syria to deter attacks on their allies and interests, with Russia
warning Washington on Monday it would treat any U.S.-led coalition
planes in its area of operations as potential targets after the U.S.
military downed a Syrian jet.

Tensions
escalated on Sunday as the U.S. military brought down the jet near
Raqqa for bombing near U.S.-allied forces on the ground, and Iran
launched missiles at Islamic State targets in eastern Syria – the first
time each state has carried out such actions in the multi-sided Syrian
war.

While aimed at
Islamic State, the Iranian strike was also a projection of military
power into part of Syria identified as a top priority by Damascus and
its allies, and followed a recent tussle with Washington over a section
of the Syria-Iraq border.

A
pro-Damascus commander said it was “a message” to all sides in the war
that could be repeated, commenting that both Tehran and Washington had
set “red lines” in the last day.
Russia,
like Iran an ally of President Bashar al-Assad, issued a warning of its
own to the United States in response to the downing of the Syrian jet,
saying on Monday it would view as targets any planes flying west of the
Euphrates River, though it stopped short of saying it would shoot any
down.

The tensions reflect
mounting competition for areas of Syria where Islamic State (IS)
insurgents are in retreat, leaving swathes of territory up for grabs and
posing the question of what comes next for U.S. policy that is shaped
first and foremost by the priority of vanquishing the jihadists.

The
United States said the Syrian army plane shot down on Sunday had
dropped bombs near fighters of the Syrian Democratic Forces (SDF), a
U.S.-backed alliance of Kurdish and Arab fighters battling to capture
the city of Raqqa from IS.

Russia’s
Defence Ministry responded on Monday by suspending cooperation with the
United States aimed at avoiding air incidents over Syria, where the
Russian air force is bombing in support of Assad’s campaigns against
rebels and IS.

The Syrian army said the jet was shot down while flying a mission against Islamic State.

The
SDF however accused the Syrian government on Monday of attacking its
positions using planes, artillery and tanks. “If the regime continues
attacking our positions in Raqqa province, we will be forced to
retaliate,” SDF spokesman Talal Silo said.

The
Syrian government this month marched into Raqqa province from the west
but had avoided conflict with the U.S.-backed SDF until the latest
incident.

“The SDF is
getting big-headed,” said the pro-Damascus military commander, a
non-Syrian who spoke to Reuters on condition of anonymity. “There could
be problems between it and Soheil Hassan,” said the commander, referring
to the Syrian officer leading the government offensive in Raqqa
province.

Yezid Sayigh, a
senior fellow at the Carnegie Middle East Center in Beirut, said the
sides were establishing red lines in a fluid situation, and the Syrian
government was “always testing and pushing the boundaries”.

“I
don’t think the Americans are testing the red lines. They are saying
‘we have a red line here and if you are going to test it we will
respond, but it doesn’t mean we are now shifting strategy’ because they
also want to reassure the Russians.”

The United States has
said its recent actions against Syrian government forces and allied
militia have been self-defensive in nature, aimed at stopping attacks on
U.S.-led coalition forces or their local allies.

These
have included several air strikes against pro-government forces that
have sought to advance towards a U.S. base in southeastern Syria near
the border with Iraq, where the U.S. military has been training Syrian
rebels to fight IS.

The
area is of strategic significance to Tehran as it seeks to secure a
land corridor to its allies in Iraq, Syria and Lebanon and establish a
“Shi’ite crescent” of influence that has long concerned U.S.-allied
states in the Middle East.

The missiles fired by Iran’s
Revolutionary Guards on Sunday targeted IS in Deir al-Zor province, fast
becoming the jihadists’ last remaining foothold in Syria and a declared
military priority of Tehran’s allies in the Syrian government.

The
attacks have showcased the depth of Iran’s military presence in Syria:
Iranian drones launched from areas around Damascus allowed Revolutionary
Guard commanders to assess the damage done by the missiles in
real-time.

Two top
Revolutionary Guard commanders said that the strikes were intended to
send a message to the perpetrators of militant attacks in Tehran last
week – claimed by Islamic State – that killed 18 people, as well as
their supporters.

“I hope
that the clear message of this attack will be understood by the
terrorists as well as their regional and international supporters,” said
Amir Ali Hajizadeh, the head of the Revolutionary Guards’ aerospace
unit, according to the website of Iranian state television.

Six
missiles with a range of between 650 to 700 kilometers (400-435 miles)
were fired from western Iran, soaring over Iraqi territory and striking
the targets in Deir al-Zor.

State
TV posted black and white aerial video on their website on Monday which
they labeled as the moment of impact of the attack. A projectile can be
seen hitting a building followed by thick black smoke billowing out.
State TV repeatedly aired video footage of the beginning of the attack
Monday, showing several missiles streaking across a dark night sky.

Other
Iranian officials were more blunt in their assessment of the
attack. “This attack, before being a message for the terrorists, is a
message for the supporters of terrorism in the region which are
symbolized by the Saudi regime and the Americans,” the state television
website quoted Iranian parliamentarian Javad Karimi Qoddousi as saying. 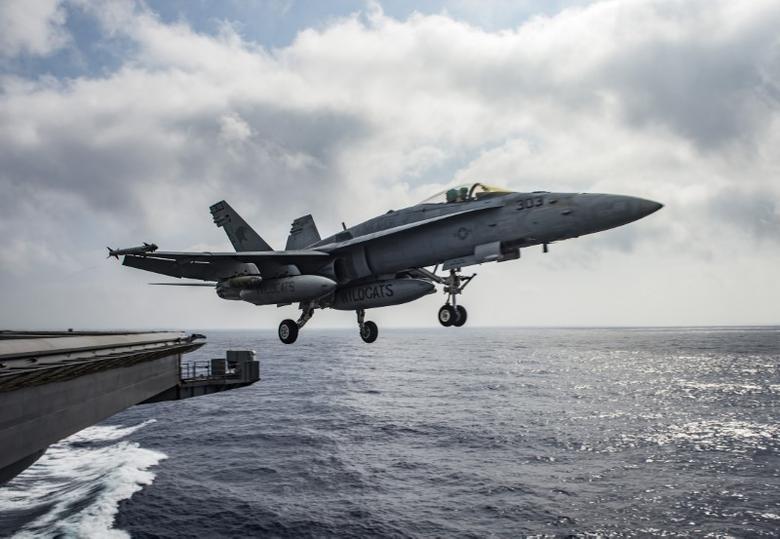 Otto Warmbier student who was returned from North Korea in coma has died.