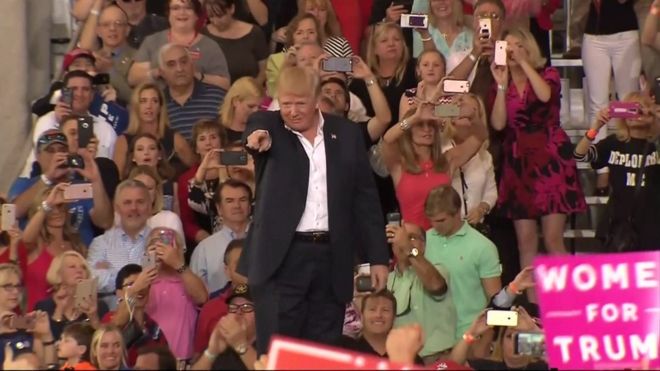 US President Donald Trump has
launched another fierce attack on the media at a “campaign rally for
America” event in the state of Florida.

He told the crowd in Melbourne the media did not want “to report the truth” and had their own agenda.

He also defended the achievements of his presidency so far, insisting that a spirit of optimism was sweeping the US.

Mr Trump had attacked the media at a press conference on Thursday, as pressure mounted on his presidency.

His
national security adviser Michael Flynn quit earlier in the week. Mr
Trump is to interview candidates for the role on Sunday.

Before Air Force One landed, President Trump came to the back of the
aeroplane. He shook our hands and told us we’d see “a fantastic crowd of
people” at the rally. He was warm and friendly to us on the aeroplane
but things changed at the rally.

Standing on stage, he said
reporters “are part of the corrupt system”. When he attacked the media,
people in the audience screamed their support.

I sat with other
journalists in an area that was surrounded by metal gates. At times the
animosity towards the media felt personal: my colleague was taking
photos, and one man held his hand in front of her lens.

As we left the hangar, another man said to us: “Goodbye, lying media.”
On Saturday, President Trump and his wife Melania were greeted by
thousands of supporters at the rally in a state he won in November’s
election. Protesters have also promised to line the route to the venue.

In his speech, Mr Trump said he wanted to speak to Americans “without the filter of fake news”.

Describing
the media as “dishonest”, he repeated his assertion that some outlets
“don’t want to report the truth” and were making up their stories about
him.

“We will continue to expose them,” he said, pledging to “win, win, win”.
In his speech, the president also:

It is unusual for a sitting president to hold a rally in the style of those held during election campaigns.

One
supporter, Gene Huber from West Palm Beach, said the decision to hold a
rally was not a concern. “No jitters at all,” he told the AFP news
agency. “This is a world leader now who’s taking control.” 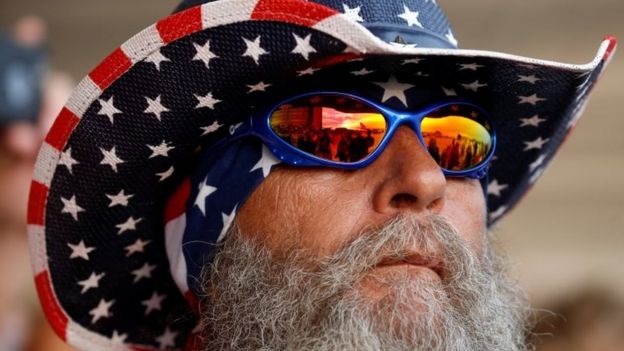 Throughout the week, Mr Trump launched attacks on the media while indicating his excitement at facing crowds in Florida again.

On
Thursday, he held a 76-minute press conference where he told reporters
their level of dishonesty was out of control, citing coverage of his
campaign’s alleged contacts with Moscow.

Michael Flynn, Mr Trump’s
national security adviser, resigned on Monday after he misled
Vice-President Mike Pence about whether he had discussed US sanctions
with Russia’s ambassador before his own appointment.

Meanwhile,
the New York Times reported earlier this week that members of Mr Trump’s
campaign and other Trump associates had repeated contacts with senior
Russian intelligence officials in the year before the election.

While
in Florida, Mr Trump is staying at his Mar-a-Lago resort for the third
weekend in succession. In a tweet, he referred to the property as the
“Southern White House”, although the private club is part of Mr Trump’s
portfolio and is not government property.

While there, he will interview four candidates for the role of national security adviser. They are:

Warning against weakening of Europe says france to United States.