When former
reality television contestant Summer Zervos accused Donald Trump of
sexual misconduct last fall, she pursued her claims solely in the court
of public opinion, since the allegations dated too far back to allow a
lawsuit.

But last month, she
found a fresh approach to fight the former host of “The Apprentice,”
who has vehemently denied her allegations that he groped her in 2007. By
professing his innocence, the man who is now president of the United
States had effectively called her a liar, Servos alleges in a defamation
lawsuit.

The suit copied a rare
legal tactic employed most notably by several women who have accused the
actor and comedian Bill Cosby of sexual assault: using his denials as
the basis for a defamation claim.

It
is not uncommon for high-profile allegations against celebrities to
prompt defamation lawsuits, but they are usually filed by the star
against the accuser.

In 2014,
however, Joseph Cammarata, the attorney for Cosby accuser Tamara Green,
realized he could adapt that strategy for his own purposes after Cosby’s
lawyer issued a statement calling the allegations “fantastical.”

Like many other Cosby accusers, Green was unable to sue for assault because the alleged incident occurred decades ago.

“A
direct claim for the assault is not available, so I came up with the
idea that a defamation claim would be the appropriate vehicle to use to
address the underlying harm,” said Cammarata, whose lawsuit now includes
seven Cosby accusers as plaintiffs. All told, 10 Cosby accusers filed
four defamation lawsuits in three states.

In
simple terms, the argument is that Trump and Cosby have effectively
branded the women as liars by denying the incidents occurred. But the
women face a difficult challenge in making their cases, experts say.

“Merely
saying, ‘I didn’t do it,’ is traditionally not seen in defamation law
as calling your accuser a liar, even though logically that’s what it
means,” said Rod Smolla, dean of the Delaware Law School and a First
Amendment scholar.

“But if you go
beyond that – if you go from, ‘I didn’t do it,’ to, ‘She’s a liar,’ now
you have arguably made a statement of fact” that could be subject to
liability, he added.

Trump’s status as president does not shield him from civil liability for actions he took prior to assuming office.

In
a statement on Tuesday, the attorney defending Trump in the Zervos
lawsuit, Marc Kasowitz, said he and Trump’s personal lawyer would soon
file a response to the lawsuit.
“President Trump continues to deny any allegation of wrongdoing raised in said complaint,” he said.

Cosby, 79, who faces allegations of sexual misconduct from approximately 50 women, has also denied any wrongdoing.

The Cosby and Trump plaintiffs are taking on a tough double burden, experts said.
First, the only way to show the denials by both men are untrue is to prove the incidents took place as described.

“The
burden is going to be on her to show that Trump is actually saying
something that’s false,” Clay Calvert, a First Amendment expert at the
University of Florida, said of Zervos.
In
addition, the women must show Trump and Crosby crossed the line into
defamation by deliberately making false statements that seriously harmed
the accusers’ reputations.

In defamation cases, courts typically examine
statements to determine whether they were factual or opinion, as
expressing an opinion is generally protected by the First Amendment.
Making
that distinction can be challenging. In the Cosby cases, for instance,
judges have split on whether the lawsuits should proceed, even coming to
opposite conclusions regarding the same statement from his attorney.

U.S.
District Judge Mark Mastroianni in Massachusetts rejected Cosby’s
attempts to have two cases, including Green’s lawsuit, thrown out. In
his rulings, the judge found that a November 2014 statement from Cosby’s
lawyer calling the allegations “unsubstantiated, fantastical stories”
could be reasonably seen as factual, and therefore potentially
defamatory.
By contrast, a
Pittsburgh federal judge, Arthur Schwab, tossed a similar case against
Cosby, finding that the same statement was “pure opinion” and thus
protected.

Unlike Cosby, who has
been fairly circumspect in his public statements, Trump has aggressively
attacked his accusers, calling the claims “100 percent fabricated and
made-up.” His rhetoric could make him more vulnerable to a defamation
claim, experts said.

Trump has said
he never met Zervos at a hotel, despite her allegation that he groped
her at a hotel in Beverly Hills, California.

That
type of specific fact-based assertion can also make it easier to show
defamation if it can be proven false, according to Eugene Volokh, a law
professor at the University of California in Los Angeles. 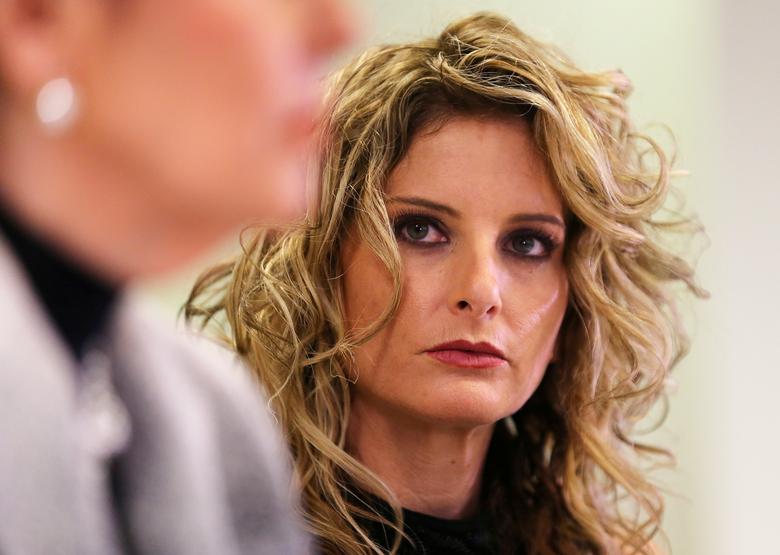 THE STRENGTH OF A WOMAN DOES NOT LIE BETWEEN HER LEGS.