President-elect
Donald Trump dismissed a controversy over Russian hacking during the
2016 U.S. election campaign as a “political witch hunt,” the New York
Times reported on Friday before U.S. intelligence agencies were to brief
him on the matter.

The
midday briefing coincided with deep tension between U.S. intelligence
agencies and Republican Trump, who has disparaged their conclusions that
Russia staged cyber attacks to interfere in the election by hacking
Democratic Party institutions and campaign staff of his opponent Hillary
Clinton.

“China, relatively recently, hacked 20
million government names,” Trump said in a telephone interview with the
New York Times, referring to the Office of Personnel Management breach
in 2014 and 2015. “How come nobody even talks about that? This is a
political witch hunt.”

Trump’s
questioning of the intelligence agencies’ conclusions have not only
drawn the ire of Democrats but also fellow Republicans. Senators John
McCain and Lindsey Graham, both Republicans who took part in a Senate
hearing with U.S. spy chiefs on Thursday, have called for further
congressional inquiries.

Trump told
The New York Times the motivation for the attention on Russian cyber
attacks was because the Democratic Party lost the election.

“With
all that being said, I don’t want countries to be hacking our country,”
the newspaper quoted Trump as saying before the briefing, details of
which have not yet been made public. “They’ve hacked the White House.
They’ve hacked Congress. We’re like the hacking capital of the world.”

Russia denies the U.S. government’s allegations of hacking during the election campaign.
Trump’s
comments appeared to contradict the views expressed by two of his
senior aides on Friday morning that he would have an open mind about the
issue when he meets top U.S. intelligence officials in Trump Tower in
New York.

Trump
would question the heads of the top U.S. intelligence agencies about
their methods and conclusions, said spokesman Sean Spicer and Kellyanne
Conway, who will be a counsellor to Trump when he is sworn in on Jan.
20.

“He’s prepared to listen and
understand how they got to the conclusions they did,” Spicer told ABC on
Friday, saying Trump has “a healthy skepticism of everything.”
Conway said it was too soon for Trump make a judgment even as he has repeatedly tweeted this week about the hacking issue.

Director
of National Intelligence James Clapper and the heads of the Central
Intelligence Agency and Federal Bureau of Investigation are expected to
attend Trump’s briefing on the hacking issue. An unclassified version of
their report is expected to be released as early as later on Friday.

Clapper,
the top U.S. intelligence official, told lawmakers on Thursday he was
resolute in his conviction that Russia was responsible for the hacking
and pushed back against Trump’s criticism.

“There’s
a difference between healthy skepticism … and disparagement,” Clapper
told the Senate Armed Services Committee. He said, however, that he
did not believe that Russian hacking had actually changed any vote
tallies.

The U.S. agencies, which
concluded months ago that Russian intelligence agencies had directed the
hacking of the Democrats, said in their final intelligence report that
they had identified the Russian officials who fed the hacked material to
WikiLeaks through a third party, according to senior U.S. officials.

The Senate Intelligence Committee said it would hold a hearing on Tuesday with the intelligence chiefs.
Trump
on Twitter has called himself a “big fan” of intelligence agencies
while also casting doubts that Russia targeted former secretary of state
Clinton, in order to sway the Nov. 8 election in his favor.

In
what could be an effort to discourage government officials from talking
to the media about the allegations, Trump on Friday said he would ask
congressional panels to investigate NBC’s receipt of top secret
information, apparently referring to the report on Russian hacking to
influence the election.

White House spokesman Josh Earnest told reporters he was confident that no information was leaked by the White House.

Jack
Langer, a spokesman for the Republican majority of the House
Intelligence Committee, said he had no comment on Trump’s tweet because
the congressional panel had not received an official request.

Adam
Schiff, the committee’s top Democrat, responded to Trump on Twitter,
suggesting his request was a sideshow: “Of all issues implicated by
Russian active measures, this is what you want to investigate? This is
your top priority for intel committees?” 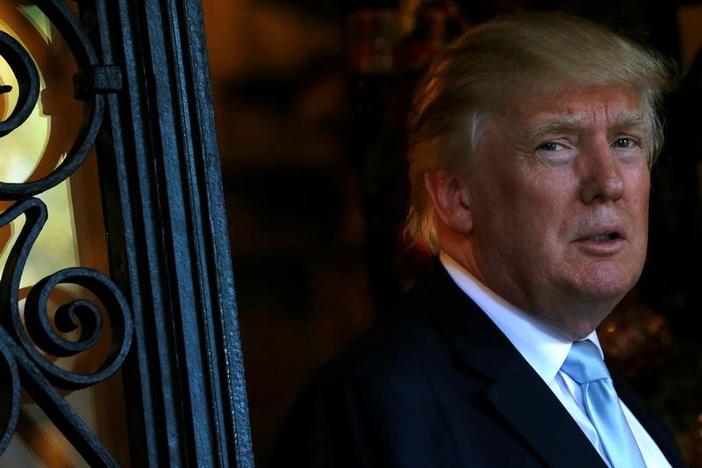