Taiwan warned on
Tuesday that “the threat of our enemies is growing day by day”, as
Chinese warships led by the country’s sole aircraft carrier sailed
towards the island province of Hainan through the South China Sea on a
routine drill.

China
has given few details of what the Soviet-built Liaoning aircraft
carrier is up to, save that it is on a routine exercise. Taiwan has said
the aircraft carrier skirted waters outside of its eastern air defense
identification zone.

The
carrier is expected to arrive at a Chinese military base on the southern
Chinese island of Hainan late on Tuesday, Taiwan’s defense ministry
said.

The
drill comes amid renewed tension over Taiwan, which China claims as its
own and says is ineligible for state-to-state relations, following U.S.
President-elect Donald Trump’s telephone call with the island’s
president that upset Beijing.

“The
threat of our enemies is growing day by day. We should always be
maintaining our combat alertness,” Taiwan Defence Minister Feng
Shih-kuan said. “We need to strengthen the training (of our soldiers) so
that they can not only survive in battle but also destroy the enemy and
accomplish the mission.”

Feng’s remarks were given in a speech Tuesday at a ministry event marking the promotion of senior military officers.

China
claims most of the South China Sea, through which about $5 trillion in
ship-borne trade passes every year. Neighbours Brunei, Malaysia, the
Philippines, Taiwan and Vietnam also have claims.

The
Pentagon did not directly comment on the latest drill but said that the
United States recognizes lawful use of sea and airspace in accordance
to international law.

“We
continue to closely monitor developments in the region. We do not have
specific comments on China’s recent naval activities, but we continue to
observe a range of ongoing Chinese military activity in the region‎,”
Pentagon spokesman Gary Ross told Reuters.

The
Liaoning has taken part in previous exercises, including in the South
China Sea, but China is years away from perfecting carrier operations
similar to those the United States has practiced for decades.

Last
December, the defense ministry confirmed China was building a second
aircraft carrier but its launch date is unclear. The aircraft carrier
program is a state secret.

Beijing could build multiple aircraft carriers over the next 15 years, the Pentagon said in a report last year.

China has claimed sovereignty over Taiwan since 1949, when
Mao Zedong’s Communist forces won the Chinese civil war and Chiang Kai-shek’s Nationalists fled to the island.
Beijing has vowed to bring Taiwan under its rule, by force if necessary. 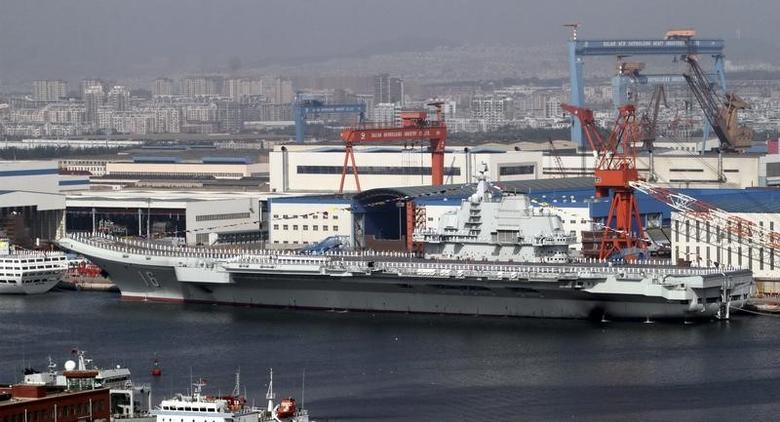