The non-profit organisation said some 50 Jews had chosen to stay in Yemen.

Since 1948, 51,000 Jews have emigrated to Israel from Yemen, which has one of the world’s oldest Jewish communities.

Almost all of them were brought to Israel as part of Operation Magic Carpet in 1949 and 1950.
In
recent years, some 200 Jews have left as attacks against the Jewish
community have increased and the country has descended into war.

The Jewish Agency announced on Monday that the group landed in Israel on Sunday night following a “complex covert operation
“Nineteen individuals arrived in Israel in recent days, including 14
from the town of Raydah and a family of five from Sanaa,” a statement
said.

“The group from Raydah included the community’s rabbi, who brought a Torah scroll believed to be between 500 and 600 years old.”

The
Jewish Agency said attacks against Jews in Yemen had risen sharply
since 2008, when Jewish teacher Moshe Yaish Nahari was murdered in
Raydah.

In 2012, Aharon Zindani – whose son and four other
relatives were on board Sunday’s flight to Israel – was murdered in
Sanaa and a young Jewish woman was abducted, forced to convert to Islam,
and forcibly wed to a Muslim man, it added.

After the conflict between the Yemeni government and the rebel Houthi
movement escalated a year ago, when a Saudi-led coalition intervened
militarily, the Jewish community found itself increasingly imperilled
and covert operations to spirit Jews out of Yemen were stepped up.

The
Jewish Agency said some 50 Jews remain in Yemen, including
approximately 40 in Sanaa, where they live in a closed compound adjacent
to the US embassy and enjoy the protection of Yemeni authorities.
Both
the capital and Raydah are controlled by the Zaidi Shia Houthi
movement, whose slogan is: “God is great. Death to America. Death to
Israel. A curse on the Jews. Victory to Islam.”

Sunni jihadist militants from al-Qaeda and Islamic State (IS) have also gained ground by taking advantage of the unrest.

The
Chairman of the Executive of the Jewish Agency, Natan Sharansky, said
the arrival of the final group of Jewish immigrants from Yemen was “a
highly significant moment in the history of Israel”.
“From
Operation Magic Carpet in 1949 until the present day, the Jewish Agency
has helped bring Yemenite Jewry home to Israel. Today we bring that
historic mission to a close.”

“This chapter in the history of one
of the world’s oldest Jewish communities is coming to an end, but
Yemenite Jewry’s unique, 2,000-year-old contribution to the Jewish
people will continue in the State of Israel.” 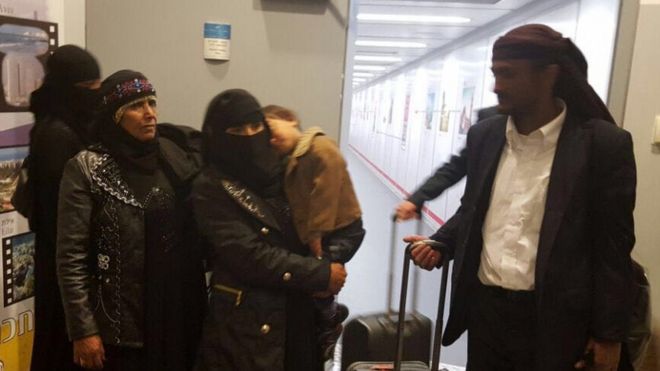