Obama
and Castro will have their fourth meeting, likely their most
substantial, at the Palace of the Revolution, where Castro and his
predecessor, older brother Fidel Castro, have led Cuba’s resistance to
U.S. pressure going back decades.

A
U.S. presidential visit to the inner sanctum of Cuban power would have
been unthinkable before Obama and Raul Castro’s rapprochement 15 months
ago, when they agreed to end a Cold War-era dispute that lasted five
decades and continued even after the collapse of the Soviet Union.

The two leaders have deep differences to discuss as they attempt to rebuild the bilateral relationship.
Obama
is under pressure from critics at home to push Castro’s Communist
government to allow dissent from political opponents and further open
its Soviet-style command economy.

His aides have said Obama will encourage more economic reforms and greater access to the Internet for Cubans.

“One
of the things that we’ll be announcing here is that Google has a deal
to start setting up more Wi-Fi and broadband access on the island,”
Obama told ABC News in an interview that aired on Monday. He gave no
other details, and representatives for Google could not be immediately
reached.

His administration hopes
changes might also come at a Communist Party congress next month but
doubts any political opening will be forthcoming.

Still, Obama has promised to talk about
freedom of speech and assembly in Cuba. “I will raise these issues
directly with President Castro,” he told the Cuban dissident group the
Ladies in White in a March 10 letter.
Castro
has said Cuba will not waver from its 57-year-old revolution and
government officials say the United States needs to end its economic
embargo and return the Guantanamo Bay naval base to Cuba before the two
nations can enjoy normal relations.

Obama
has urged Congress to rescind the 54-year-old embargo but has been
rejected by the Republican leadership. He now has both Democratic and
Republican elected officials with him on his Cuba trip and hopes
Congress may act after the Nov. 8 presidential election.

One Cuban yelled
“Down with the embargo!” during Obama’s tour of Old Havana, and the
president responded by raising his right hand.

Asked
about the potential for U.S. companies to lose out to other countries
in the Cuban market, Obama told ABC: “There’s no doubt that we still
have some work to do, and part of that is bringing an end to the embargo
that is currently in place.” While it may not happen during his final
year in office given the U.S. presidential election, “it is inevitable,”
he added.

Thwarted by Congress on
the embargo, Obama has instead used his executive authority to loosen
restrictions on trade and travel with the Caribbean island.

Cuba has praised those measures but Castro will likely use the meeting on Monday to press Obama to go further.

Obama and Castro met
for half an hour during a regional summit in Panama last April and they
also had brief encounters at Nelson Mandela’s funeral in 2013 and at the
U.N. General Assembly last September.
Traveling
with his family, Obama was greeted by cheering crowds on the road from
the airport and while on a walking tour of Old Havana on Sunday.

Besides meeting Castro, he also plans to visit a state-owned micro brewery and attend a state dinner on Monday.

On
Tuesday, he will deliver a speech on live Cuban television and attend
an exhibition game between Major League Baseball’s Tampa Bay Rays and
Cuba’s national team. 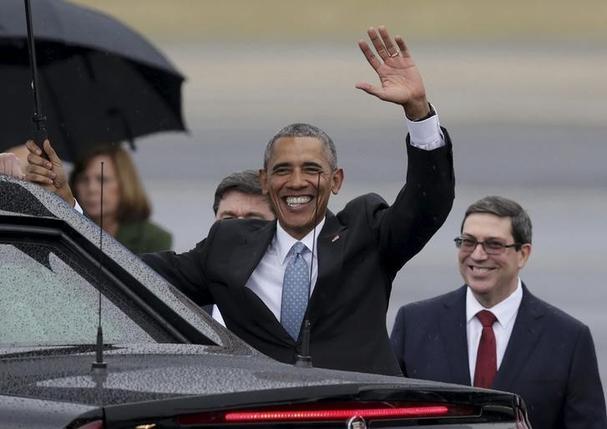