Share
Facebook Twitter LinkedIn StumbleUpon Tumblr Pinterest Reddit WhatsApp Telegram Share via Email Print
Share
Afif Sunakim, seen carrying a gun and rucksack, served seven years in prison for attending a militant camp in Aceh, police chief Gen Badrodin Haiti said.
All five were killed in Thursday’s gun and bomb attacks in the Indonesian capital, which left two civilians dead.
The Islamic State (IS) militant group has said it was behind the violence.
Security forces battled militants for hours in the busy commercial district where the militants struck.
A Canadian and an Indonesian national died, and at least 20 people were injured.
The assault ended when two attackers died in a suicide bombing, police say, with the other three killed in gun battles.
Following recent IS threats, the country, which had been attacked by Islamist militants several times in the past, had been on high alert.
Gen Haiti, the national police chief, said Sunakim and one other attacker had both been convicted criminals.
Jakarta’s chief of police, Insp Gen Tito Karnavian, said a hunt was under way for terror cells believed to be behind the attack.
Three men were arrested near Jakarta early on Friday, police told local media. It was not immediately clear whether they had direct links the attacks.
Authorities have named Bahrum Naim, an Indonesian believed to be fighting with IS in Syria, as the suspected co-ordinator.
Insp Gen Karnavian said Naim’s “vision” was to unite various IS-supporting groups across South East Asia.
IS released a statement saying it had targeted citizens of countries which are part of the international coalition fighting the group, which controls parts of Syria and Iraq.
Life is getting back to normal on the junction where the attack happened – but only up to a point.
Traffic is flowing and the road sweepers are busy but the police post which was hit remains boarded up, and the Starbucks cafe at the centre of the attack is surrounded by iron fencing, curious onlookers and media using anything at hand to peer over the top at the blown out windows.
The condolence flowers have now been removed – probably to stop the crowds gathering to take selfies, risking their lives in the morning traffic.
But with the city’s police chief admitting Thursday’s assault is likely to be a game-changer for Indonesia, there is no doubt the risk of another attack has taken a new form. And no matter how “tiny” the group, as he called them, they have proved they can kill.
Insp Gen Karnavian told the BBC the main culprits were “connected to other cells in Java and Sulawesi and we are chasing them”.
He said one IS plot had been foiled at the end of 2015 and a number of people detained, among them a man who said he had been instructed by Naim.
Naim has been linked to the IS-allied East Indonesia Mujahidin Group (MIT), which is based on the island of Sulawesi.
The police chief said Indonesia had significantly developed its understanding of domestic militant networks since the 2002 bomb attack in Bali, which killed 202 people.
Some 1,000 people linked to radical networks had been brought to justice in Indonesia since 2000, he said, but some had since been released from prison and had “the potential to pose a threat”.
“What we need to do today is strengthen capability and also sharing information with others because it is not home grown in Indonesia but it is part of a global network,” he said.
Indonesian President Joko Widodo tweeted on Friday that there was “no place for terrorism on Earth” and that “every citizen in the world” needed to fight it.
Indonesia has suffered militant attacks in the past, but has been relatively successful in curbing home-grown Islamist extremism after a spate of attacks in the last decade. Some of the deadliest include. 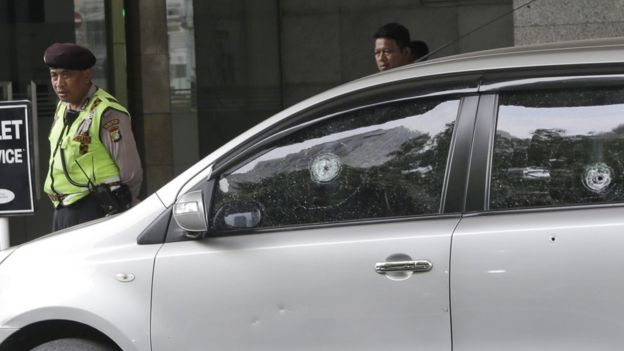 IT'S SUPPLE PRAISE,watch out for money