Share
Facebook Twitter LinkedIn StumbleUpon Tumblr Pinterest Reddit WhatsApp Telegram Share via Email Print
Share
Republican presidential front-runner Donald Trump and top challenger Ted Cruz ended a longstanding truce in spectacular fashion on Thursday night with bitter exchanges during what may have been Trump’s strongest debate performance to date.
The New York billionaire and the Texas senator appeared to have a split decision by the end of the night, a sign that for all the bluster, little took place that could derail Trump from his lead position with a contest in Iowa on Feb. 1 to begin the search for a Republican presidential nominee.
Projections that the debate would be a free-for-all were accurate. Beyond the Trump-Cruz theatrics, U.S. Senator Marco Rubio of Florida turned in a pugnacious performance with attacks on Cruz and New Jersey Governor Chris Christie. Florida Governor Jeb Bush presented himself as a voice of reason against Trump.
A Google snap poll showed viewers believed Trump, who in the most recent debates was at times less engaged, won the night with 37.3 percent to Cruz’s 26.6 percent and Rubio’s 12.1 percent.
Until the Fox Business Channel debate in North Charleston, South Carolina, Trump and Cruz had been friendly because they have both been chasing conservatives of the Tea Party movement and did not want to anger them.
With Trump now needing to fend off Cruz’s rise in Iowa, he pushed his charge that Cruz may not be constitutionally qualified to serve as president because he was born in Canada. The U.S. Constitution says only “natural born” citizens can become president of the United States.
“Who the hell knows if you can even serve in office?” Trump told Cruz, drawing a scattering of boos in the audience.
Born in Calgary, Alberta, to a U.S. citizen mother and a Cuban father, Cruz accused Trump of bringing up his birthplace simply because Cruz was leading some polls in Iowa.
Cruz said Trump, who led the movement questioning whether the Hawaiian-born President Barack Obama was really from the United States, had asked his lawyers to look into the issue of Cruz’s birth in September and concluded there were no issues.
“Since September, the Constitution hasn’t changed, but the poll numbers have,” Cruz said. “And I recognize that Donald is dismayed that his poll numbers are dropping in Iowa, but the facts and the law here are really clear.”
Trump said Democrats would sue if Cruz were on the Republican ticket, putting their party’s chances of winning at risk.
Cruz shot back that he had spent many years studying constitutional law: “I’m not going to be taking legal advice from Donald Trump.”
The birthright issue has dogged American politics before: 2008 Republican nominee John McCain survived questions about his birth in Panama because he was born on a U.S. military installation there and it was judged to be U.S. soil.
In 1967, Republican candidate George Romney faced questions about his birth in Mexico, but his candidacy never advanced far and the issue was abandoned.
‘NEW YORK VALUES’
While Cruz seemed to have parried the attack for now, he was stung by Trump on another issue: Whether people who live in New York City have the same values as other Americans. Cruz has lately begun denouncing “New York values” to connect Trump to the city’s famous liberalism.
“Everyone understands that the values of New York City are socially liberal, are pro-abortion, are pro-gay marriage,” Cruz said.
Trump, in perhaps his most heartfelt remarks of the night, harked back to New York’s response to the Sept. 11, 2001, attacks to defend his home city.
“The people in New York fought and fought and fought, and we saw more death, and even the smell of death… And it was with us for months, the smell, the air.
“And we rebuilt Downtown Manhattan, and everybody in the world watched and everybody in the world loved New York and loved New Yorkers. And I have to tell you, that was a very insulting statement that Ted made,” Trump said.
Rubio, in third place behind Trump and Cruz in Iowa and hoping a strong outcome there will help him in the New Hampshire primary on Feb. 9, frequently inserted himself into arguments and tried to put pressure on Cruz.
He accused Cruz of proposing a value added tax as part of his tax plan and of being soft on immigration.
“That is not consistent conservatism,” he said. “That is political calculation.”
He attacked Christie as well, accusing him of have liberal positions on education policy and abortion. Christie interrupted a Rubio-Cruz exchange with this blast:
“I’d like to interrupt this debate on the floor of the Senate. You had your chance, Marco you blew it,” he said.
Cruz, who has taken the lead in some polls of Iowa Republican voters, did well on social media. Social media monitoring tool Zoomph saw total positive mentions for Cruz climb by more than 150 percent while he sparred with Trump.
Trump is far ahead nationally.
A Reuters/Ipsos rolling national poll on Jan. 12 showed Trump had 39 percent of the vote, Cruz 14.5 percent, Bush 10.6 percent, Carson 9.6 percent, while 6.7 percent favored Rubio. 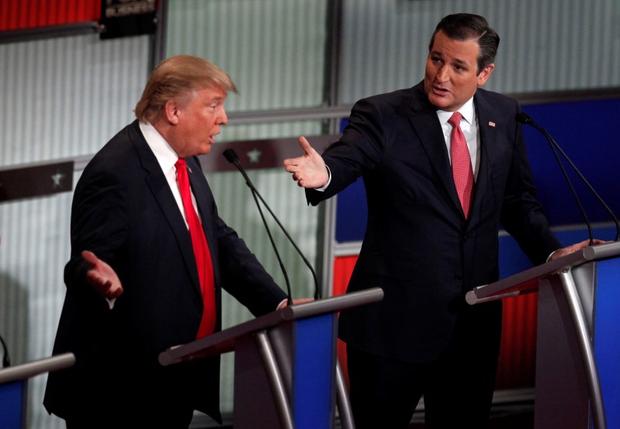