Share
Facebook Twitter LinkedIn StumbleUpon Tumblr Pinterest Reddit WhatsApp Telegram Share via Email Print
Share
Measures put in place to protect the Sistine Chapel and its famed Michelangelo frescoes from damage have been fruitful, the Vatican has said.
Visitors to the chapel, where popes are elected in secret conclaves, can reach 20,000 a day in summer, and dust, body sweat and carbon dioxide all pose a major risk to the ceiling frescoes.
Last year the Vatican installed a new climate control system to filter the air in the chapel, as well as a new high-tech lighting system programmed to cut damaging heat by more than half.
Results of recent studies were encouraging, the head of the Vatican Museums Conservator’s Office, Vittoria Cimino, said.
“The situation is under control as long as we manage to keep in check the level of carbon dioxide, which was far too high, and which we have more than halved,” she said.
“Our attention, our commitments and our economic resources must focus on creating a suitable, controlled microclimate to prevent the emergence of dangerous conditions such as those we had noted starting to develop.”
Even more visitors are expected at the chapel in coming months — Pope Francis announced in March the Roman Catholic Church will mark an extraordinary Holy Year, one of its most important events, in which faithful make pilgrimages to Rome. It will start on Dec. 8 and end Nov. 20, 2016 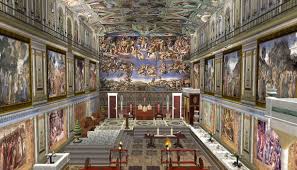 Bukola Saraki seeking to stop his trial at the Code of Conduct Tribunal.