Georgia authorities were investigating on Friday how a group of inmates in a suburban Atlanta jail were able to make a rap music video using jailhouse equipment and then get it posted on social media, sheriff’s officials said.
The 2-minute-27-second video called “Thuggin’ Live from DeKalb Jail” was posted on YouTube on Saturday, Atlanta television station WSB-TV reported.
It shows a group of inmates dancing, with several taking off their shirts and waving contraband, DeKalb County Sheriff Jeffrey Mann said in a news release on Thursday. It shows inmates with a banned cigarette lighter, the television station reported.
The inmates used the jailhouse’s video visitation system, which allows callers to see inmates while they talk remotely, Mann said. It was posted online by a person who received the video call, he added.
Authorities are reviewing how the system is monitored to make sure this does not happen again, jail officials said.
The person who posted the video will be banned from visiting the jail or using the video calling system again, the release stated.
Mann, who declined to answer further questions on Friday, said in the statement he hoped the inmates “enjoyed their 15 minutes of fame,” and all will be punished. 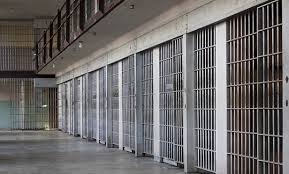