Share
Facebook Twitter LinkedIn StumbleUpon Tumblr Pinterest Reddit WhatsApp Telegram Share via Email Print
Share
Stephen Crabb told Sky News the approach being taken by the Conservative administration was “one of compassion” and dismissed criticism by the Church of England (C of E) as nothing new.
The Welsh Secretary defended the Government’s policy after more than 80 C of E bishops signed a letter branding the response as “increasingly inadequate” and said the UK should take at least 50,000 refugees.
They urged the Prime Minister to make a “meaningful and substantial response to the scale of human suffering we see daily”.
Amid pressure from public opinion to strengthen the UK’s response to the migrant crisis on Europe’s borders, the Government pledged to take in 20,000 Syrian refugees over the next five years.
However, the bishops said in the letter: “We believe such is this country’s great tradition of sanctuary and generosity of spirit that we could feasibly resettle at least 10,000 people a year for the next two years, rising to a minimum of 50,000 in total over the five-year period you foresaw in your announcement.”
The Bishop of Guildford, the Rt Revd Andrew Watson, told Sky News: “I think given the extraordinary crisis there is across Europe and the Middle East at this point, with millions of people displaced from their homes, the question is ‘what is an adequate response?’
“Clearly you do have to have a maximum somewhere. We are a crowded island, I am aware of that.
“But we feel 20,000 is about the centre court at Wimbledon. That sort of amount is just not enough given the scale of the crisis.
“Especially if the war in Syria continues for five years or more, which there is every indication it may well.”
Mr Crabb said: “Four years ago, we were out there in Syria as a government, spending taxpayers’ money investing in camps, providing clean water, shelter, security, education for those refugees fleeing war.
“Our response has been one of compassion.
“We have been at the coalface there for the last four years long before the bishops started taking a campaigning interest in this issue.”
And he defended the Government’s position to only take people from the refugee camps and not those who had already arrived in Europe.
Mr Crabb said while speaking with sky news “As a government we do not want to feed that movement, that trafficking of people, which is why we said we will take 20,000, we will resettle them in the UK but we will take them directly from the camps.”
He added: “I do think we hold our heads up high. Our response is one of compassion but it’s also one of actually thinking things through in terms of the long-term interests for those people, those families but also for this country.”
But former Scottish first minister Alex Salmond said the bishops were speaking for many people who believed the UK could not turn its back on people who had arrived in Europe.
There was a need for solidarity in dealing with the “shared crisis which is enveloping Europe”, he argued.
Mr Salmond told Murnaghan: “It’s obviously inadequate in terms of numbers but its also inadequate in terms of this idea you can ignore the refugees who have arrived in Europe. 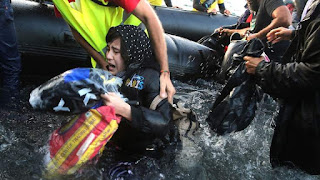 CAN WE STAND THE WORD DEFEAT.