Share
Facebook Twitter LinkedIn StumbleUpon Tumblr Pinterest Reddit WhatsApp Telegram Share via Email Print
Share
Secretary-General Jens Stoltenberg said Russia had not provided “any real explanation” of the violation, which “lasted for a long time.”
Russia says Saturday’s incursion was brief and due to bad weather. It is examining claims of another violation.
Turkey’s army also says an unidentified fighter jet locked its radar on to eight of its jets on Monday.
It echoes a similar incident on Sunday, when an unidentified Mig-29 – which analysts say may have been Syrian – locked its radar onto Turkish jets for more than five minutes over the Turkish-Syrian border.
Missile systems inside Syria were also locked on to Turkish planes for more than four minutes on Monday, the Turkish military says.
Russia says it is targeting “all terrorists” in co-ordination with Syria’s government, but Nato and allied states have expressed concern that it is concentrating its attacks on rebel groups opposed to President Bashar al-Assad, some of them backed by the West, and not jihadist groups like IS.
The latest Russian strikes also targeted positions in the north-western province of Idlib, where rebel groups have made significant gains against government forces in recent months.
Turkey has twice summoned the Russian ambassador – once over the first violation, which occurred on Saturday, and once over a second violation that Turkey says took place on Sunday.
Mr Stoltenberg called the Russian violation “unacceptable”, saying Nato was taking it “very seriously” and warning that “incidents, accidents, may create dangerous situations”
There had been “a substantial military build-up” by Russia in Syria, including ground troops and naval capabilities, he said.
Russian President Vladimir Putin has denied that civilians have been killed by Russian strikes in the past week, but evidence on the ground has indicated otherwise.
A US-led coalition has been conducting air strikes against IS in Syria and Iraq since September last year, which rights groups say have also caused civilian deaths.
Syria’s conflict, which began in 2011, has left more than 250,000 dead and about half the country’s population displaced.
(Turkey’s government has been enraged by these Russian incursions – and by Moscow’s military intervention in Syria as a whole.
First, any violation of Turkish airspace could lead to the object being shot down, which would dramatically escalate events. Second, there could be a mid-air collision close to Turkey’s borders, as this is the first time since World War Two that Russian and American combat planes have been in the skies over Syria. But third, Russia’s air strikes are the final nail in the coffin for Turkey’s “buffer zone” idea in northern Syria.
Ankara has continually pushed for this, ostensibly to allow some of the two million Syrians in Turkey to return – though critics say it’s designed to break up areas controlled by Syrian Kurds, who Turkey see as a threat.
There was already opposition in the West to the plan. But Russia’s air strikes will make it almost impossible to implement). 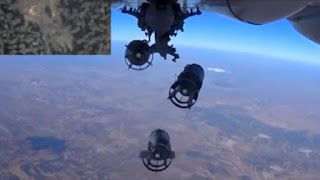 Newsroom drama in 'Truth' taken over by Blanchett andRedford