Share
Facebook Twitter LinkedIn StumbleUpon Tumblr Pinterest Reddit WhatsApp Telegram Share via Email Print
Share
MSF said the statement implies US and Afghan forces decided to bomb a hospital because of claims Taliban members were inside.
The charity blames US-led Nato forces for Saturday’s attack which killed at least 22 people, including MSF staff.
The US is investigating the incident.
Afghan government forces, backed by the US-led coalition, have been engaged in a battle to retake the northern city of Kunduz from Taliban fighters who seized it last month.
On Saturday the Afghan defence ministry said “armed terrorists” were using the hospital “as a position to target Afghan forces and civilians”.
MSF said in a statement: “These statements imply that Afghan and US forces working together decided to raze to the ground a fully functioning hospital – with more than 180 staff and patients inside – because they claim that members of the Taliban were present.
“This amounts to an admission of a war crime. This utterly contradicts the initial attempts of the US government to minimise the attack as ‘collateral damage.'”
US Defence Secretary Ashton Carter said on Sunday that a full, transparent investigation would be conducted into whether the US military could be linked to the attack.
MSF re-iterated its demand for an independent investigation by an international body.
Twelve MSF staff members and 10 patients were killed when the hospital was hit.
Dozens were injured and the hospital severely damaged by a series of air strikes lasting more than an hour from 02:00 local time on Saturday morning. 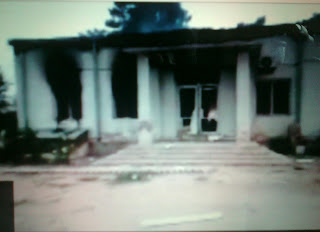