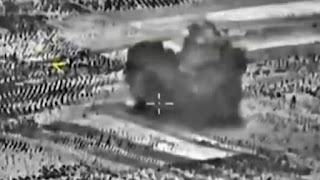 Mr Obama said he rejected the Russian assertion that all armed opponents of the “brutal” Mr Assad were terrorists.
Moscow insists its air strikes – which began on Wednesday – are targeting IS.
But the Syrian opposition and others have suggested non-IS rebels are bearing the brunt of Russian attacks.
Russia said its aircraft had hit IS command centres, arms depots and military vehicles. Targets included the IS stronghold of Raqqa, but also Aleppo, Hama and Idlib – provinces with little IS presence.
“The problem here is Assad and the brutality that he’s inflicted on the Syrian people, and it has to stop,” Mr Obama said at a White House news conference.
“We’re not going to co-operate with a Russian campaign to destroy anyone who is disgusted and fed up with Assad.”
He added: “From their [Russia’s] perspective, they’re all terrorists. And that’s a recipe for disaster.”
And Mr Obama warned Russian President Vladimir Putin that Russia – and another Assad ally, Iran – faced dangers ahead.
“A military solution alone, an attempt by Russia and Iran to prop up Assad and try to pacify the population is just going to get them stuck in a quagmire. It won’t work. They will be there for a while if they don’t take a different course.”
But he conceded that neither Russia nor the US would engage in a “proxy war” because of their differences over Syria.
In a statement, the US, UK, Turkey and other members of the coalition targeting IS with air
The UK-based Syrian Observatory for Human Rights said the latest Russian strikes hit a command post near the IS “capital” of Raqqa, killing 12 IS fighters.
Activists and residents there said IS cancelled Friday prayers and emptied mosques across the city amid fears of further strikes.
But there were also reports of strikes targeting a radio mast and communications tower in Aleppo that belonged to the Free Syrian Army – forces opposed to President Assad which have received American training and supplies.
The air strikes in Syria are Russia’s first military engagement outside the borders of the former Soviet Union since the end of the Cold War.
Alexei Pushkov, the head of the foreign affairs committee in Russia’s parliament, said the campaign – which began on Wednesday – could last for three to four months.
He added that the US had only “pretended” to bomb IS, and promised that Russia’s campaign would be much more effective.
strikes called on Russia to cease air strikes they said were hitting the Syrian opposition and civilians, adding that they would “only fuel more extremism”.
The warning from members of the US-led coalition came as the French, German and Russian leaders met in Paris. The meeting was called to discuss peace efforts in Ukraine, but were overshadowed by Syria.
French President Francois Hollande said he had reminded his Russian counterpart Vladimir Putin that air strikes in Syria should hit IS targets alone.
German Chancellor Angela Merkel, speaking alongside Mr Hollande after the summit, said: “Both of us insisted on the fact that IS is the enemy that we should be fighting.”
Syrian Foreign Minister Walid Muallem, speaking at the United Nations in New York, said air strikes alone were not enough to defeat IS but described the Russian action as “effective” because it supported his country’s efforts to combat terrorism.
He also said his country’s army was “capable of cleansing the country of those terrorists”.