Share
Facebook Twitter Google+ LinkedIn StumbleUpon Tumblr Pinterest Reddit WhatsApp Telegram Share via Email Print
Share
A New York state judge has thrown out a baseball fan’s $10 million defamation lawsuit claiming that ESPN announcers poked fun at him after he dozed off during a New York Yankees game against the Boston Red Sox.
Andrew Rector sued the Walt Disney Co unit, the Yankees and Major League Baseball’s Internet arm for defamation and intentional infliction of emotional distress over comments by Dan Shulman and John Kruk during the April 13, 2014 game, in a video clip that was later posted online.
The announcers discussed Rector’s appearing to sleep through a standing ovation after a Yankee home run, missing a chance to consume chicken fingers with the man next to him, and comparing his physical appearance to that of Kruk’s.
Bronx Supreme Court Justice Julia Rodriguez, however, said the comments were not defamatory, and at worst, reflected hyperbole or a looseness of words. She also said Rector was on camera for just 31 seconds of the three-hour game.
Valentine Okwara, a lawyer for Rector, on Friday said he had advised his client that “there is room for appeal.”
The decision is dated Aug. 17 but received little attention until this week. 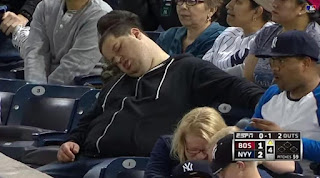