Spanish tenor Jose Carreras, 68, a founding member of the Three Tenors classical trio, will give the premiere of a retrospective show entitled “A Life in Music” next year at London’s Royal Albert Hall.
The Barcelona native, who became a star of the world opera stage in the 1970s and later rose to superstardom alongside Placido Domingo and Luciano Pavarotti in the Grammy-winning tenor trio, is scheduled to perform the show on May 15, 2016, the promoters said on Thursday.
“‘A Life in Music’ will take fans on a unique musical journey, as José sings the songs that have influenced and defined his life, from the tunes he loved as a boy to the arias and songs he performed as one of the famous Three Tenors,” they said in a statement.
Carreras said the show would include greatest hits and special surprises.
“For me this will be a very special occasion to share all of the music that means the most to me,” he said.
The show will also feature opera, operetta, musical numbers, music from the Mediterranean and songs from the Belle Époque, with Carreras accompanied by the Royal Philharmonic Concert Orchestra,
Carreras started singing at the age of six after seeing Mario Lanza in the movie biography “The Great Caruso” about the Italian tenor Enrico Caruso.
He appeared as a boy soprano in Barcelona and came to the attention of the Spanish soprano Montserrat Caballe, who helped launch him on an operatic career.
Carreras suffered from a life-threatening bout with leukemia in the 1980s. 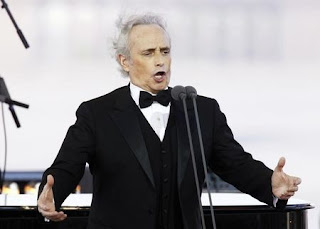 'FMG' BE PART OF THIS OPPORTUNITY!